Earlier this week, Mayor and Winston-Salem Alliance president Allen Joines oversaw the official powering-up of the LED lights on the Twin Arches over Highway 52.

The public art initiative is a public/private partnership spearheaded by the Creative Corridors Coalition. It’s the first of several projects that Creative Corridors are working on in conjunction with the ongoing road-work along Highway 52 and Business 40.

The Winston-Salem Journal is reporting that opinions on the Twin Arches are mixed. I personally find the Twin Arches a little underwhelming. But the view from Research Parkway is compelling. 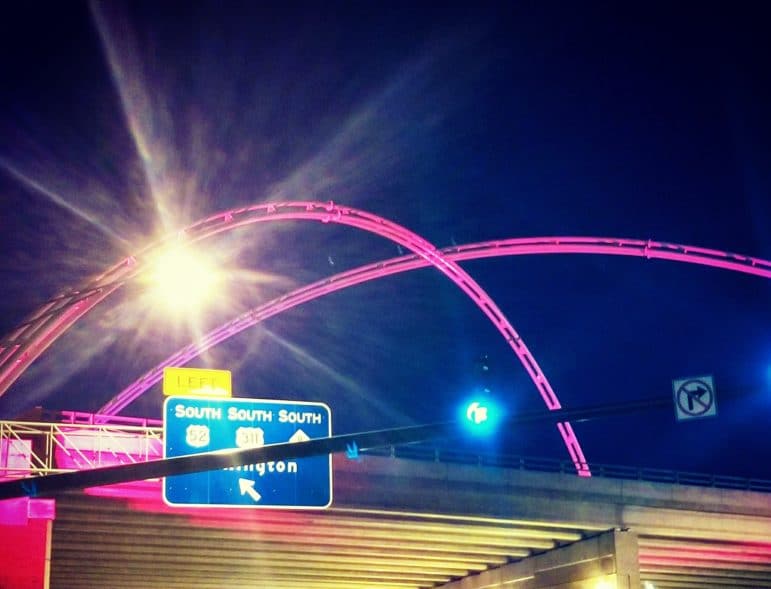 The Twin Arches themselves are the capstone of the tens of millions of dollars that have been spent on the construction work that has been done along the Salem Creek Connector and Research Parkway.

While the entire city will benefit from the Salem Creek Connector, the Wake Forest Innovation Quarter is the big winner. They now have a beautiful, modern roadway that will facilitate the future growth of the WFU Innovation Quarter.

Looking at the new Twin Arches, I’m reminded that roads are a reflection of political power, who has it and who doesn’t. The Salem Creek Connector and Research Parkway show the power that Wake Forest yields at the city, county, and state levels. In Winston, it’s widely believed that what is good for Wake Forest is good for Winston. (That’s a narrative that should be challenged).

As the Salem Connector and Research Parkway are a reminder of a private college’s power, Highway 52 has for decades been a reminder of who doesn’t have political power in Winston-Salem.

In a city full of racial boundary lines, Highway 52 is the defining racial boundary line. East of 52 is where the city’s predominately Black neighborhoods are by design. They’re the product of systemic racism (red-lining, urban renewal, and other toxic policies).

East Winston has the city’s highest rates of unemployment and poverty. It’s been the victim of Winston’s growth and modernization over the decades. Urban renewal and highway construction bulldozed much of East Winston’s best neighborhoods.