President Trump held a campaign rally at Smith Reynolds Airport yesterday. Trump is the embodiment of all that is wrong with the 1 percent of Americans who monopolize the wealth that we all create. Trump is a foul-mouthed fascist who despises immigrants, minorities, workers, women, renters, generally, anyone who wasn’t born white and privileged like him. Trump’s approximately one hour and forty-minute speech was full of hatred and lies.

President Trump’s visit to our city brought out the worst reactionary elements in our community. What Richard Nixon called the “silent majority” has morphed into an obnoxious minority. All those red MAGA hats made me long for the days when FLOC held annual marches in Winston.

FLOC arrived in our city on buses, certainly not aboard Air Force One. They marched 200-300 protesters strong, waving the red and black flag of FLOC, reminding us that red is the color of workers (Trump has appropriated it). Their marches through Downtown Winston struck fear in the hearts of Reynolds’ executives. FLOC’s multi-ethnic, multi-racial marchers, spoke truth to power. By contrast, Donald Trump, the epidemy of white privilege has never worked an honest day in his life. Trump panders to the common white man (and woman), but never actually delivers jobs, healthcare, or other programs they need. 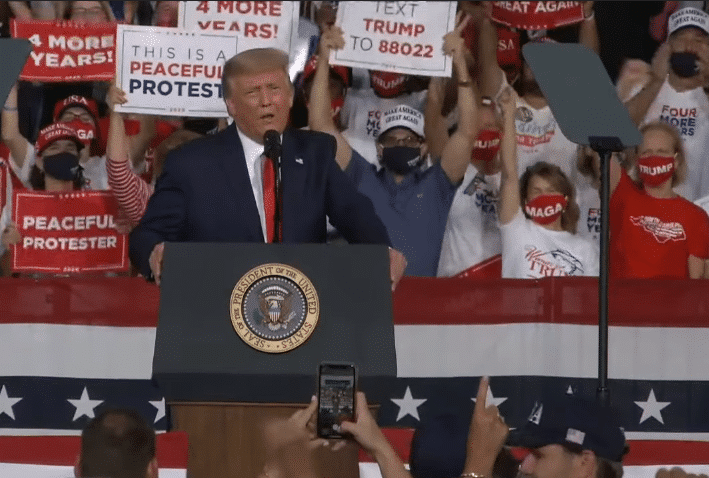 From 2008-2016, FLOC members and supporters gathered outside of Reynolds’ corporate headquarters during their annual shareholders meetings in an impressive show of community solidarity, bringing the issues that Reynolds refuses to discuss to their corporate boardroom.” –FLOC

FLOC demonstration at RJ Reynolds from Prashanth Kamalakanthan on Vimeo.

FLOC’s demands are reasonable. They want BAT/Reynolds to end farmworker exploitation in the tobacco fields of North Carolina and other tobacco-growing states. FLOC won essential gains for farmworkers in Campbell’s and Mount Olive Pickle’s supply chains. But thus far, old Papa Reynolds and big, bad BAT have refused to make any concessions to FLOC. Shame on them!

When President Trump stepped off Air Force one at Smith Reynolds Airport, he was only 15 miles from BAT/Reynolds American’s massive manufacturing facility in Tobaccoville.

In Tobaccoville, a tiny town with an enormous cigarette factory, Reynolds American makes a ridiculous amount of cigarettes per minute. And you know what they say about cigarettes, they enter the factory as tobacco and leave as profits! Those profits go disproportionately to the executives in Winston and London and shareholders across the globe. Only a very small portion of BAT/Reynolds American’s profits goes to the farmers who grow the tobacco. Both the farm owners and farmworkers are being exploited by BAT/Reynolds American, that needs to stop!

The 2 million square-foot cigarette factory in Tobaccoville sits on a 614-acre site — 46 of them are indoors. About 350 million smokes a day come out of this place, 80 billion a year. The machines that put them together churn out about 10,000 cigarettes per minute. In half an hour they make more cigarettes than I have smoked in my lifetime. By a lot.”

While at Smith Reynolds, Trump was less than 13 miles from the Reynolda House, the palatial “bungalow” that Katharine Reynolds built with tobacco money in 1917. Trump was an equal distance from neighboring Wake Forest University, which was lured from Wake Forest, NC to Winston during the Truman administration with tobacco dollars. Trump was only four to five miles from the downtown headquarters of the Z. Smith Reynolds Foundation and similar foundations that were initially endowed by tobacco fortunes.

It’s not hard to find evidence of Reynold’s wealth distributed throughout Winston, though you will find far less evidence of Reynolds’ wealth on the east side of the city. It’s time that a tiny fraction of BAT/Reynolds American’s wealth was spent on farmworkers. Squalid housing conditions and toxic work conditions are unacceptable. One of the lessons of Covid-19 is that the health and safety of individuals affect society as a whole. We can no longer ignore the plight of farmworkers.

With Labor Day fresh on our minds, we all need to support FLOC by signing their petition and encouraging others to do the same. FLOC (Farm Labor Organizing Committee) is a farmworker union that stands in the gap between corporations, farm owners, and migrant farmworkers.


*Since this article, Reynolds now produces Newport cigarettes at its massive plant in Tobaccoville, in addition to its signature Camel brand. They no longer produce less popular brands such as Winston and Salems. But with smoking rates declining, I’m not sure if they produce more or fewer cigarettes in Tobaccoville than the numbers TCB reported in 2014. But it’s obvious that they still produce a hell of a lot of cigarettes!