Saturday’s college football game between Wake Forest and Appalachian State rekindled a rivalry that had been dormant for years. Wake Forest was lucky to leave Boone with a narrow 20-19 victory.

When residents of the 5th District vote in November of 2018, it will be a chance for Winston-Salem to retake the 5th from Watauga County’s Virginia Foxx.

It will be a chance for moderates and progressives to reject Foxx and her politics of hate and division.

Prior to Foxx winning the 5th in 2004, the 5th District was dominated by politicians from Winston.

Richard Burr, who happened to play football while he was at Wake Forest, served 5 terms in the 5th. He served the 5th from 1995-2005, before being elected to the Senate.

Representative Virginia Foxx has now been elected for 6 consecutive terms. The balance of power in the 5th has shifted from Winston and the politics of moderation to Boone since Foxx took office.

The 5th District has been Foxx country for years now. It’s been a safe, rural, Republican district that allowed Virginia Foxx to practice her brand of divisive pro-billionaire, anti-LGBTQ, anti-worker, anti-student politics without fear of being rejected by voters.

But with the recently redrawn electoral maps, there is new hope that Virginia Foxx could be defeated in 2018.  Winston-Salem/Forsyth County is now entirely in the 5th District, thanks to a court decision that re-drew the extremely gerrymandered 12th District.

The 12th no longer follows I-85 up from Charlotte, into mostly black sections of Winston and Greensboro. Now all of Winston-Salem/Forsyth County is in the 5th District, not just the predominantly white parts.

The 5th District is still too rural and white for my liking. It’s an example of why districts in North Carolina keep disproportionately electing Republicans even though voters in N.C. are roughly split 50/50 between the two major parties.

Non-partisan redistricting is something that we should all support and demand. The 5th District and all other districts in North Carolina should reflect local and regional ties. The only thing that Boone and Winston have in common is that they both have Mast General Stores.

A non-partisan group recently showed what objective congressional districts could look like. Duke University and Common Cause North Carolina’s proposed non-partisan 5th District would be composed of Davidson, Forsyth, Yadkin, Stokes, Surry, and parts of Allegany and Rockingham Counties. Watauga County would be lumped in with other mountain counties in Western North Carolina.

But even as the 5th District is currently drawn, Foxx will no doubt face a competitive election in 2018. Seeing Virginia Foxx in East Winston at a historical marker unveiling recently, I was reminded that Foxx will have to face urban voters for the first time who find her right-wing rhetoric unacceptable.

Talking to voter in the 5th at #fiesta2017 sponsored by @hispanicleague pic.twitter.com/QyvDQX8fgK

The winner of the Democratic Primary, Jenny Marshall or Councilmember Denise Adams will face Foxx in the general election. I support Marshall. I am impressed by her platform. Denise Adams is a supporter of Hillary Clinton. I find her uninspiring.

The fight to retake the 5th won’t be easy. In the end, just a point or two might separate the winner from the loser, similar to Wake’s 20-19 victory over App State. Progressives all across the 5th District should be excited about the chance to unseat Virginia Foxx. 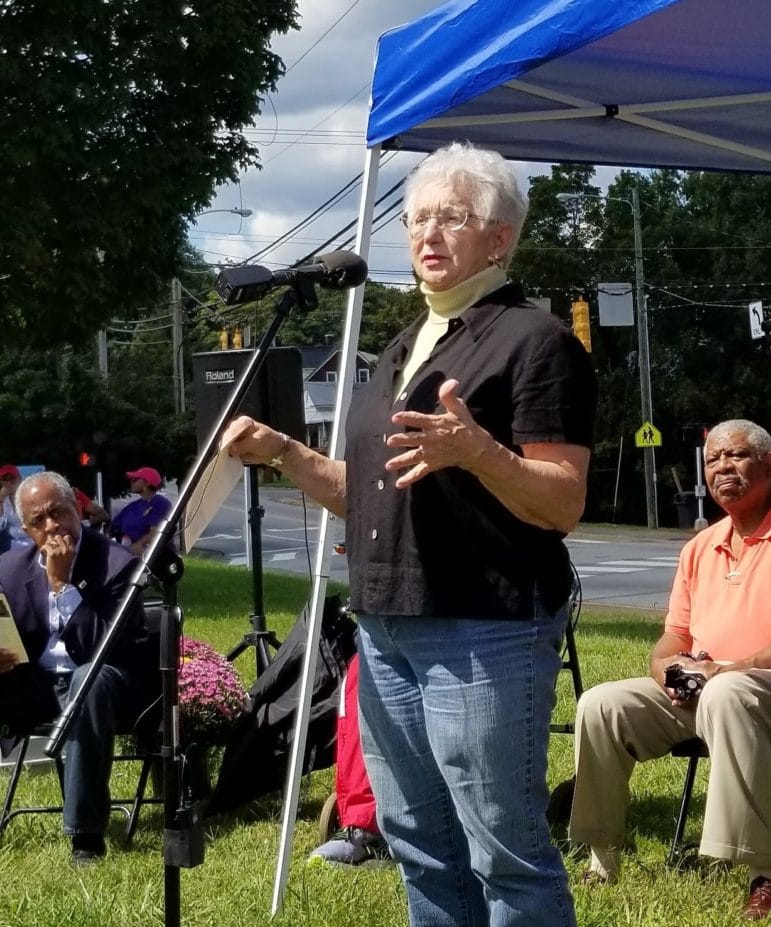