The Twin City Sentinal ended its run as an independent newspaper when it merged with the Journal in 1985. It’s hard to say exactly when the Camel City Dispatch died. Was it this year or the year before? But there is little doubt that CCD is dead.

Camel City Dispatch is a local journalism project that came to Winston’s mobile devices, tablets, and PCs in 2012. The ambitious upstart website was determined to challenge the Winston-Salem Journal. After a good 3-4 year run CCD is a now a mere time capsule. CCD hasn’t published anything new since May.

I’m not writing this article to condemn Chad Nance or the Camel City Dispatch. I’m just trying to piece together what happened from all the available information that I can gather.

The Camel City Dispatch, according to Chad Nance’s 2012 interview on The Less Desirables was the first online news daily in Winston. CCD featured a little bit of everything; crime reporting, the Art’s, what’s going on in the streets, non-profit reporting, even W-S Dash baseball games.

With the continued hollowing out of the Winston-Salem Journal, other news sources are more important now than ever.

I miss the days when Camel City Dispatch was roughly on par with Triad City Beat, Yes Weekly and the Winston-Salem Chronicle.

I didn’t always see eye-to-eye with the Camel City Dispatch, but never-the-less I miss it. Nance blocked me on Twitter after I sent one negative tweet his direction. I disagreed with the hatchet job he did on a local citizen filming the police.

Winston’s has remade itself. Camel City is a name from Winston’s past. It holds some currency today, Reynolds is still selling the world’s most deadly consumer product.

But in many ways, Winston has moved past tobacco. The streets of Downtown Winston aren’t filled with the sweet smell of Camels anymore.

Cigarettes aren’t even made in Winston, they’re produced in Tobaccoville. To me, a camel and a typewriter, two outdated symbols never made an effective logo.

Whatever Nance’s strengths and weakness are as a writer and content provider, it’s not his fault that Google and Facebook decided to essentially monopolize advertising revenue at the same time that he was trying to make his website viable.

With today’s internet and mobile space being dominated by a handful of large companies that leaves only crumbs for everyone else. Anyone can launch a website, but there are real systemic challenges for profitability.

Key points in CCD’s decline,  Nance loses interest in politics in early 2014 after witnessing Ken Raymond’s voter suppression shenanigans. Camel City Dispatch never took on City Hall for anything that I can remember, except for funding the Winston-Salem Chronicle.

But when the Camel City Dispatch abandoned political coverage, they no longer held much relevance to me. After all, local news content is the one thing that readers can’t get from prominent national websites.

Camel City Dispatch went on to rebrand itself as “Winston-Salem’s News Cooperative.” But sadly, other writers never came to CCD. 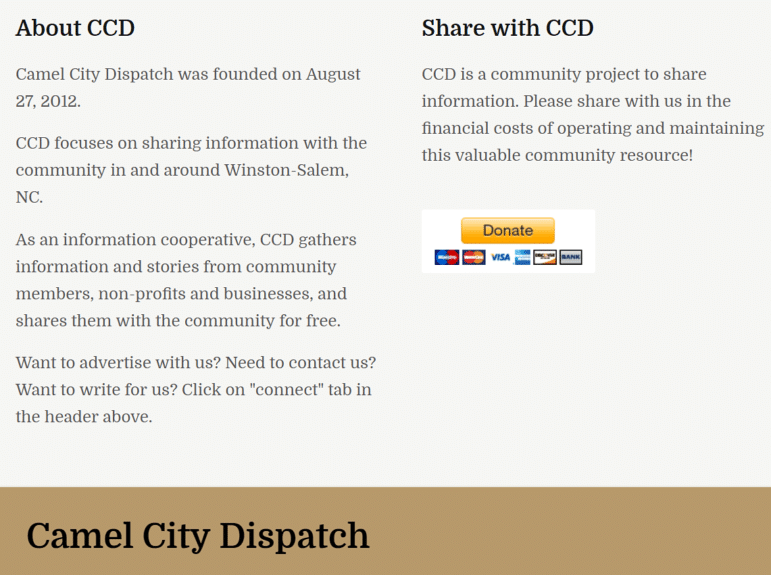 Triad City Beat succeeded in roughly the same time period that Camel City Dispatch failed. It takes a dedicated team of professionals to run a news website. Journalism is time-consuming work, not to mention maintaining a website and selling advertisements. It’s understandable that it wore Nance down.

Triad City Beat is a core group of seasoned journalists and newspapermen; Brian Clarey, Jordan Green and Eric Ginsburg, who all came over from Yes Weekly. There are other writers and interns at TCB that contribute to the Triad’s alternative paper of record each week.

By contrast, the CCD was primarily a husband and wife duo. Fam Brownlee, Ed Bumgardner and other strong, local voices contributed to the Camel City Dispatch for a while.

But they didn’t stick around. That was CCD’s greatest problem. They couldn’t find a way to assemble and retain contributing writers to compliment Nance’s content.

At some point, Camel City Dispatch deteriorated to the point that is was just Chad Nance, some other contributors here and there, plus breaking police releases and community announcements. I remember going to CCD and learning that a local gas station had been robbed and that an arts festival was around the corner.

He had good coverage of the Moral Monday movement, the Coal Ash controversy in Stokes County, the Hanes Lowrance toxic mess, and many other stories.

Nance had good long form coverage of the crazy Satanist killer in Clemmons.

But Nance, in my opinion, was too devoted to long-form articles. Perhaps Nance was trying a little too hard to imitate Hunter S. Thompson. His 3rd Shift articles were often more than the average reader was willing to endure.

Nance is a talented writer, but in my opinion writing long articles and books reduced his output of Camel City Dispatch articles. I understand wanting to produce quality and not quantity. But readers want fresh content.