Tuesday night’s WS/FCS Board meeting was another spirited affair. Supporters of R.J. Reynolds’ Home Field Advantage probably got more pushback from Save Hanes Park activists than they expected. But in the end, the school board voted unanimously to approve HFA’s plans for a new football stadium at Wiley Middle School.

Save Hanes Park supporters are definitely on the right side of history. Reynolds’ proposed new football stadium* is the wrong project, in the wrong place, at the wrong time.

The Winston-Salem, Forsyth County School system has a wealth of needs. A new football stadium for R.J. Reynolds isn’t one of them. That’s why Reynolds’ Home Field Advantage is the wrong project.

Hanes Park is a nearly 100-year-old park that’s already in danger of becoming an athletic park, with just a token amount of green space. A football stadium would be a terrible addition to Hanes Park. It would bring in thousands of cars on game nights to a neighborhood that doesn’t have space for them. Northwest Boulevard and Hawthorne around Reynolds and Wiley would be impassable during football games. Hanes Park is the wrong place.

This is the wrong time for WSFCS to build a new football stadium, even board member David Singletary said, “that ship has sailed.” Reynolds should have built a football stadium years ago.

For many, many decades Reynolds has played football games at Bowman Gray Stadium and Deaton/Thompson Stadium. But suddenly, that’s a hardship that must be addressed? I’m not buying HFA’s argument.

A decade or so ago, when BB&T Ballpark was constructed, there should have been an effort to make BB&T Ballpark capable of hosting other athletic events, like high school football. BB&T Ballpark is roughly a mile from RJR’s campus. It could be their home field.

An on-campus stadium will address this long-standing inequity and provide RJR students with the same opportunities as students in the rest of the county and state.    -Reynolds HFA

Reynolds is the oldest school in the county; the school will celebrate its centennial in just a few years. They have a large and powerful alumni base in Winston. Apparently, they’re a well-connected group that the school board can’t say no to.

“In 2012 this was presented to our board as an entirely private venture. -Elizabeth Motsinger.

They began their Home Field Advantage campaign with loud assurances that their new stadium would be 100 percent privately funded. After failing to raise the money they promised, they’ve scaled back their plans and secured public dollars, for their “advantage.”

The school board and the local paper don’t want to admit that a once private initiative has become a public/private partnership.

No. Taxpayers would pay at both the beginning of the project and after construction is completed. An estimated $3 million* is required for a new gym necessitated by the stadium’s demolition of two existing gyms. Taxpayers would also pay for new access streets and for additional unspecified elements of the development. The day construction is completed, taxpayers would assume payment of ongoing operating expenses including stadium, lights, clean up, added security, and facility maintenance.

Reynolds new stadium is a vanity project to help RJR compete with Reagan and West Forsyth, an effort to return RJR High to its former glory. (It might even be an effort to maintain masculine football culture at an arts magnet school.)

Whatever reasons Reynolds Home Field Advantage have for their obsession with building a football stadium, it’s a ridiculous project for a city and county that are deeply divided racially and economically.

A new school for Ashley is the current moral issue before us. Ashley Academy should be rebuilt and open to school children before the board even thinks about giving more money to Reynolds’ new stadium.

“Lord, let us be intentional in our actions” -opening prayer.

I hope @RJRHomeField never gets built. But if it does, let it be with Reynold’s own money. Don’t let this private venture take more of our tax dollars. #Schoolsb4stadium#Schoolsb4stadium

Ellen Knot, “building a stadium of this size will have a negative impact on Hanes Park…It is the responsibility of Reynolds HS and the @wsfcs to be good stewards of the land given to them…” #Schoolsb4stadium #action4ashley #SaveHanesPark

“I was an athlete…I learned how to collaborate and cooperate,” how to work for mutual benefit. What bothers me most, is that @wsfcs would put preciuos taxdollars into an unneeded stadium.” -Steve Rapp #Schoolsb4stadium #SaveHanesPark

“When the stadium folks poped up in 2012, they had big plans…” At the current rate it would take them 20 years to raise their original goal. Now they want public dollars to fund their private iniative. -well spoken activist, I didn’t catch her name. #Schoolsb4stadium

HFA wants a governemet bailout.” What they really deserve is small class sizes” and adequate facilities. “They’ve only came up with $1 million…while too many schools have serious needs that need to be addressed (I think he means Ashley).
-Bill Gibson, #Schoolsb4stadium

Well dressed man, sounding much less thoughful than the Save Hanes Park activists, says the gate will increase in the proposed stadium that is not a football stadium. -recent head of RJR booster club #AdvantageIsOverrated #LetsPromoteEquity #Schoolsb4stadium #SaveHanesPark @wsfcs

“They do get a ticket out…” ridiculus argument made by @RJRHomeField proponent. Let’s do everything we can for kids. Building a new football stadium isn’t on my list of things our kids need. It’s a vanity project for RJR alumni. #MakeRJRGreatAgain #NoWayJose #FoolishPipeDream

Save Hanes Park activist, asks what is going on with Willey’s gym?
And also brought up the fact that, @wsfcs paid for renovations for RJR’s auditorium in the past.

HFA entered into an agreement with @wsfcs in 2012, by which they would raise all the money privtely! HFA is moving the goal posts. -Well said Mr. Rose.

That’s a flag on @RJRHomeField for improperly representing their intentions. #Schoolsb4stadium 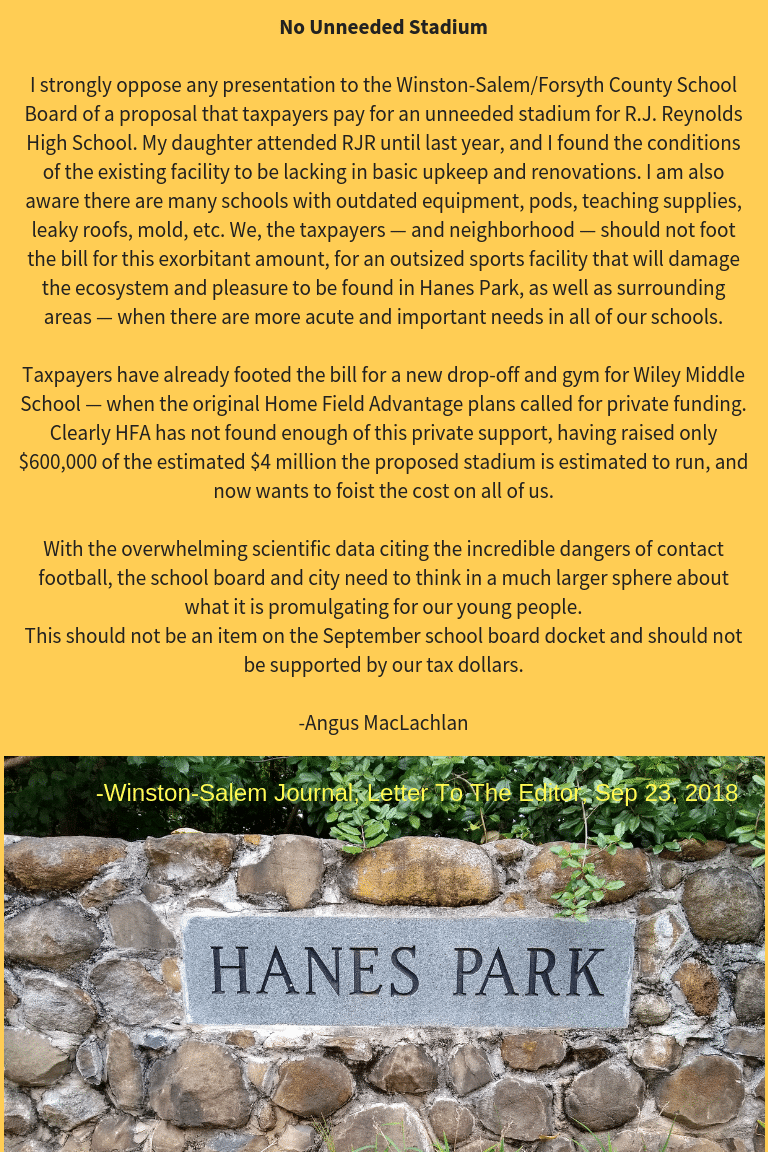