Salem College’s commencement was held today at the Lawrence Joel. Susan Goldberg, the first woman to serve as editor in chief of National Geographic Magazine, addressed the Salem Class of 2017. Her presence at Salem wasn’t the media circus that Jill Abramson’s 2014 commencement address at Wake Forest was.

Abramson, The Times’ first executive editor, was controversially fired by our nation’s paper of record just days before she came to Winston. Her firing ignited a lively debate about women in management on social media. Throngs of reporters followed Abramson to Wake Forest, to get her first public comments on her treatment by The Times.

Goldberg’s commencement speech, by contrast, was largely what one would expect. She shared the story of her career as a journalist who rose to become an editor in chief at a prestigious magazine. Then she shared her life lessons with Salem’s Class of 2017. The funny thing is that Mrs. Goldberg thrived in a different era when the path to the middle class and the upper class wasn’t so perilous. Goldberg was given a full-time job at the Seattle Post Intelligencer before she even finished college.

Susan Goldberg’s career path is one that none of Salem’s Class of 2017 could possibly imitate. No one is giving jobs to journalists before they finish their undergrad anymore! A master’s degree in journalism from a prestigious university is the only way to guarantee that you’ll get a job in journalism today. And forget about getting a big salary or moving up the ranks quickly. And no matter how hard you work, you’ll have to pray that when your newspaper or magazine makes job cuts, that your job is saved.

It’s not just the media, practically every other field of employment has changed for the worse over the last 30 years. But Goldberg embraces today’s job market, she loves it. What about the rise of I.A., which threatens to eliminate a substantial portion of today’s white-collar jobs? What about continued productivity gains that make full-time employment harder and harder to find? The multitude of threats facing today’s workers doesn’t concern Mrs. Goldberg.

“Massive change is what the Class of 2017 should expect,” said Goldberg.  She told Salem’s graduates that they could expect to work up to ten jobs in their lifetimes. Susan Goldberg maintains that disruption is something to embrace, not fear.”The world is precarious, make bold choices…you’re graduating in the golden age of disruption.” Susan Goldberg is out of touch, to say the least.

Thanks for nothing Susan Goldberg. She’s a member of the elite who doesn’t seem to care that the latter she used to climb to the top is no longer there for today’s graduates. Whatever money Salem College paid Mrs. Goldberg, it was wasted. That money could have been better used to upgrade Salem’s WiFi or hot water heaters.

Goldberg’s commencement address will soon be forgotten, as it should be. But the recent actions of Salem’s students will be remembered for years to come. Salem has been educating women since 1772, but today’s student body is different from Salem’s graduates of old. They are their own women, not merely the wives of Winston’s exclusively male business class. 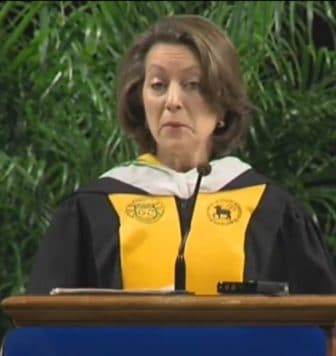 Salem’s Class of 2017 is comprised of women of action. As Salem 2017 Class President, Katie Hilderbrand said, “when our class sees injustices on campus and off campus we confront them.” Hilderbrand was, of course, speaking about the sit-in movement that dissatisfied Salem students led last month.

Though the sit-in only lasted a week or so, it was a powerful reminder of the power of collective action to address grievances. Students occupied campus buildings, they shut Salem College down. It was quite remarkable. Salem students have a great many grievances, from the poor quality of Salem’s accommodations and services to entrenched racism and transphobia.

Many students at Salem also believe that the administration made false promises to them and that the value of their expensive, private school education won’t equal or exceed the student loans they’ve taken out.

Individual talent and hard work won’t insulate college graduates from the ruthlessness of today’s economy, as Mrs. Goldberg implied. Employers are pushing workers like never before. Wages are down, health care costs are up. Home ownership is down. The American Dream is becoming for many, just that, a dream. In order for workers to get what they deserve, they’re going to have to come together and organize.

An honest commencement speaker would have told Salem’s graduates that just as they organized on campus to get what they deserved at Salem, that organizing spirit is what they’ll need for the rest of their lives. The middle class wasn’t created by a few talented individuals rising to the top of their respective professions. The middle class came about by decades of organizing and collective action.

Salem’s students have shown that they possess the capacity to engage in collective action. I hope they ignored Susan Goldberg’s careerist advice today. I sincerely hope that the students at Salem will continue to challenge the status quo and make the world a better place for all of us, not just those on top.