The August 20th Winston-Salem City Council meeting was one to remember. It was the most democratic city council meeting that I have ever witnessed. It was a rare example of people in the council chamber pushing back against the mayor and city council.

Typically the Winston-Salem City Council doesn’t give much time for citizens to voice their concerns. Public comments are given at the end of council meetings, just before adjournment. They are little more than an afterthought.

But, because three costly economic incentive items were on the August 20 agenda, a more extensive period of public comment was mandated. Residents were able to speak out before each item was voted on by the council.

Concerned members of Winston’s Black community, led by JoAnn Allen engaged the city council in a substantive debate on the merits of economic incentives. But that was just for starters. Local, East Winston activists weren’t able to keep economic incentives from passing. But they were able to thwart Mayor Joines’ plan to appoint the next city council member from the East Ward.

Millions of dollars in incentives to The Whitaker Park Development Authority,  Cook Medical, and National General Insurance produced a good conversation between residents and the council on the merits of economic incentives.

Previous incentives to Dell, Caterpillar, and other corporations have failed to deliver the jobs that were promised. Incentives to Inmar, like the incentives to Cook Medical are just moving a company from one part of the city to another.

Ken Rasheed, pointed out that residents in East Winston feel disenfranchised. They see what is happening downtown, while little is being done in their neighborhoods.

Councilmember D.D. Adams answered back by saying that our city is in a precarious position, forced to compete with other municipalities across the nation.

Cities throughout the country are being held ransom by corporations. Pay them, or they won’t come. Keep paying them, or they will leave. It’s outrageous!

I believe that anytime the city subsidizes local businesses they should earmark at least half of the amount of those incentives to fund job creation and home ownership in East Winston, through worker cooperatives and a community land trust.

The problem with local incentives and community economic development projects in Winston is that they tend to disproportionately favor Downtown Winston and other affluent portions of the city. BB&T Ballpark, Wake Forest Innovation Quarter, Whitaker Park Development, are just the most high profile examples of the City of Winston-Salem subsidizing sections of the city that need it the least. By contrast, East Winston tends to get token projects like the failed Liberty Street Market and Goler CDC’s hydroponic lettuce operation in Kimberly Park.

After the city council adopted incentives, it’s raison d’etre, the council wrestled with how to replace Councilmember Derwin Montgomery. Mayor Joines and the council approved a resolution for the council to appoint the next council member from the East Ward.

East Ward Activists Speakout, And The Council Backs Down:

But an unlikely alliance between Councilmember Robert Clark (the council’s lone Republican) and African American activists present in the council chamber forced the W-S City Council to reconsider its measure to appoint Derwin’s replacement.

Mayor and W-S Alliance president, Allen Joines tried to push a proposal to appoint the next member of the city council from the East Ward. But then Robert Clark spoke eloquently on the subject.

I find it ironic that tonight we have voted for two traffic calming motions because we think the people should make the decision, yet tonight we are going to ask seven of the eight people who are going to vote on this motion, do not live in the East Ward…I do not think a white Republican from the West Ward should be picking which Democrat should support the East Ward…Let the citizens of the East Ward decide who they want.”        -Robert Clark

After Clark put spelled out how undemocratic it would be to appoint Derwin Montgomery’s replacement. The W-S City Council passed the motion by a 6-3 vote.

Perhaps other members of the city council didn’t hear what Robert Clark said or maybe the council members didn’t have time to let Clark’s words sink in. But the activists gathered in the council chamber understand what Councilmember Clark said, and they proceeded to explain the matter to the W-S City Council.

One resident after another expressed their disgust at the city council’s plan to appoint the next council member from the East Ward. They quoted the law in question and demanded that the W-S City Council do more than the bare minimum that state law prescribes.

East Ward activists pushed the council to resend its vote to appoint Derwin’s replacement. Philip Carter pointed out that Robert Clark was respecting the will of East Ward residents. He went on to say that East Ward residents didn’t wish to be disenfranchised.

Clearly, the African American members of the city council got what East Winston residents were saying. They didn’t want to be on the wrong side of history in an election year.

An impressive collection of activists articulated just how wrong the council was on appointing Derwin’s successor. So, led by Vivian Burke the council reconsidered its earlier vote. They repealed that vote. 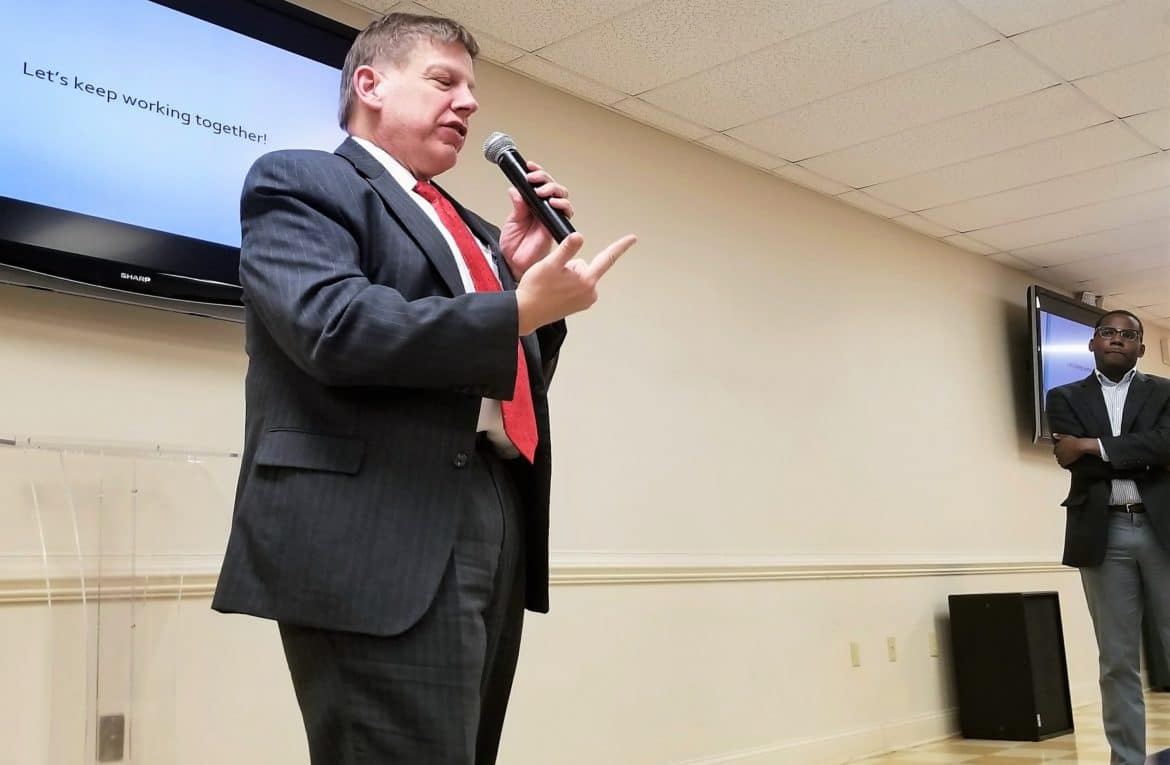 The matter will be addressed at tonight’s meeting of the city council. The August 20 city council meeting was a reminder that the people’s will matters.

It’s crucial that folks come out to tonight’s city council meeting to ensure that Derwin’s replacement is put before East Ward residents instead of the city council.

We will know that democracy is flourishing in the East Ward of our city when the next member of the council from the East Ward needs to put the people of the East Ward and East Winston first, instead of rubber stamping Allen Joines’ agenda. We need a councilmember like Larry Womble or Larry Little, who don’t mind criticizing the city and demanding more for East Winston.