In 2016, the City of Winston-Salem partnered with North Carolina A&T’s Landscape Architecture program. Seniors in the program (with the input of local residents) created various adaptive reuse plans for the Nissen Wagon Works complex. Undoubtedly, these plans would have been expensive to implement. But that is the cost of ‘turning a neighborhood around’ as they say. The plans that Carol Davis, head of Atkins CDC, recently presented to the City are modest, even uneventful by comparison.

Waughtown Street on the city’s southside used to be synonymous with wagons. Tobacco put Winston on the map. In the decades from Reconstruction to the 1940s, tobacco was transported to market locally by wagon, often Nissen wagons. Some of the best-made wagons in the Southeast United States were produced on Waughtown Street in Southeast Winston. 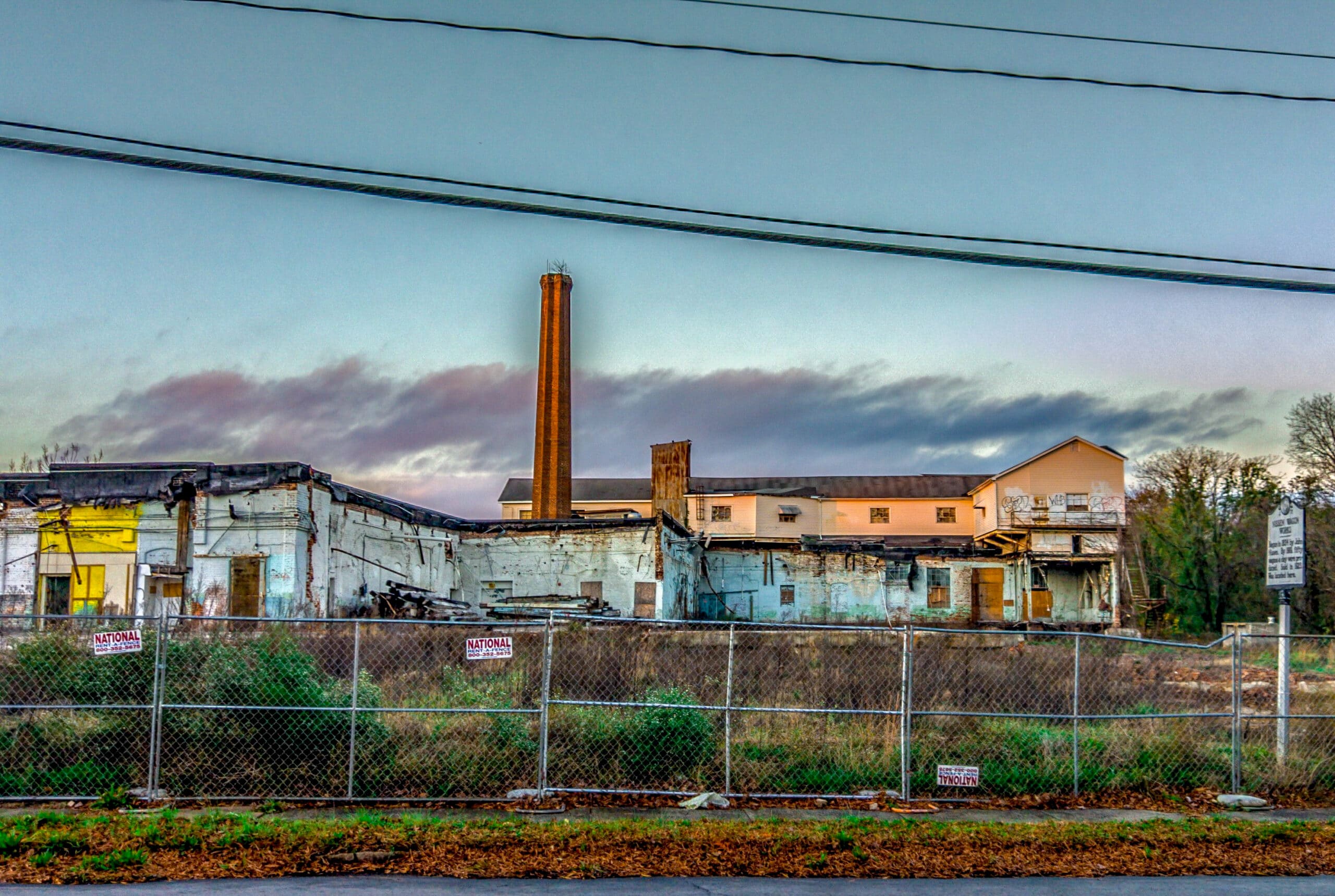 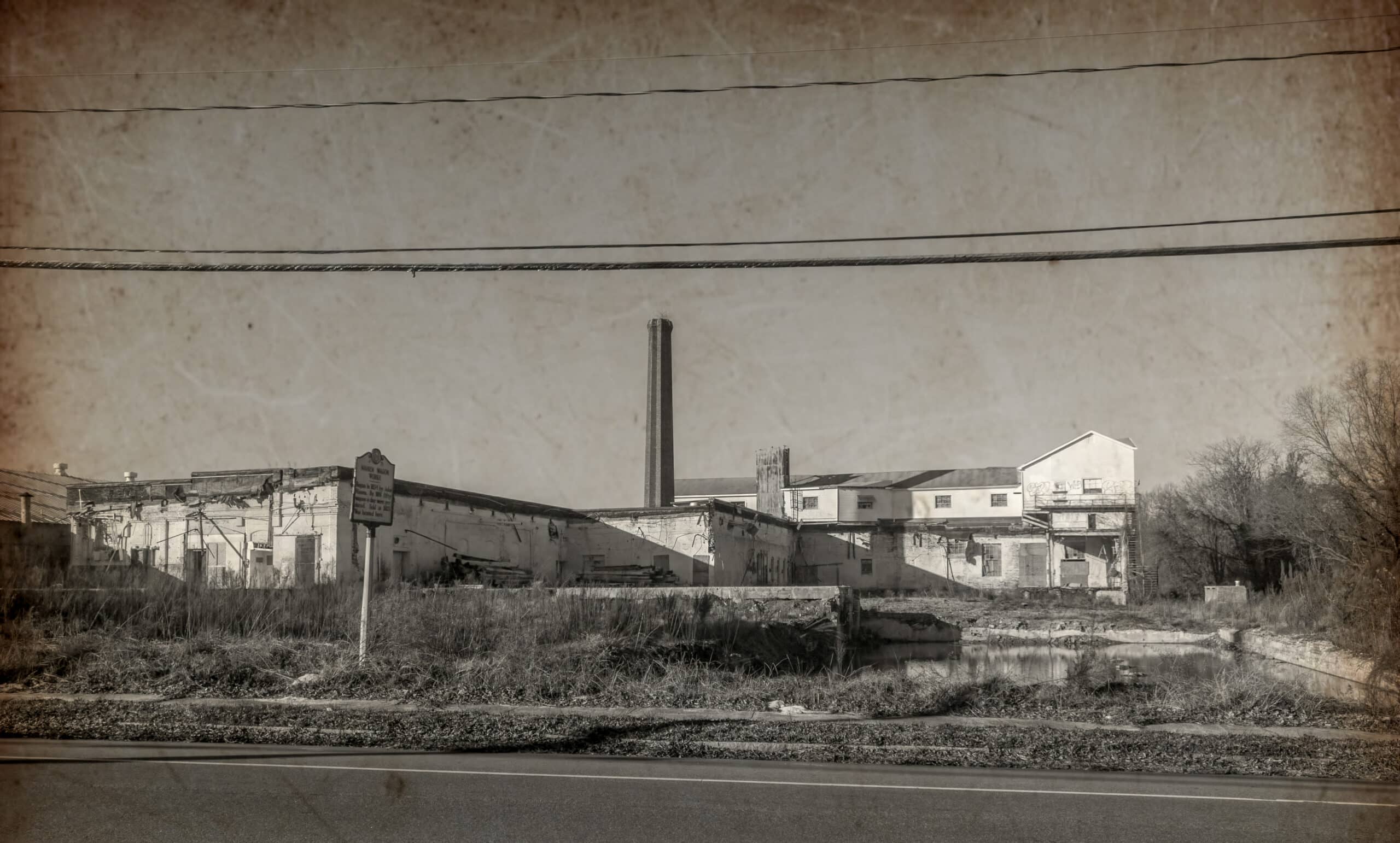 The Nissen Wagon Works facility on Waughtown stretched for 600 acres at the company’s zenith. Spach Wagons, Nissen’s local compitotor were also produced on Waughtown Street. Today, you can find some members of the Nissen family and the Spach family buried at nearby Waughtown Cemetery. But the great wagon factory complex that dominated Waughtown Street for decades is gone.

The old brick building is not only the last remnant of an important wagon-manufacturing plant founded in 1834: After 1947, when the building was acquired by Western Electric, it was the place where the guidance system was manufactured for the Nike Ajax, the first operational surface-to-air missile.

The last historic piece of the Nissen Wagon Works, a fine brick building built a century ago (portions of the building date back even further) crumbled to the ground in late 2018. The historic structure, neglected and poorly maintained, collapsed under the weight of heavy snowfall in December 2018. The historical marker at 1539 Waughtown only adds insult to injury. Yesterday’s Nissen Wagon Works is today’s Nissen Wagon ruins-a refuge for birds and a magnet for gang taggers undeterred by the WSPD’s presence next door.

Nissen Wagon Works would have been saved if it had been in a more affluent zip code.

The former Nissen Wagon Works, by contrast to other Nissen-related properties, has become a symbol of disinvestment and the systematic neglect of working-class Black and Brown communities in Winston, particularly East Winston. The building’s collapse is a tragedy that could have been avoided if the City of Winston-Salem had acted to preserve Waughtown with a small fraction of the resources it showered upon Downtown Winston-Salem.

In 2015, the City opened a police station adjacent to the Nissen Wagon Works. In 2016, the City discussed converting the historic property into a library. That would have required them to partner with the County (on the library) and the property owner to redevelop the rest of the property. A public-private partnership to save the Nissen Wagon Works never came to fruition.

It’s been seven years since the WSPD moved into the District 2 station (at a cost of over $2 million). The residents of Waughtown Street and surrounding Southside neighborhoods have received zero community benefits except for quicker response times from the WSPD. But community home values, schools, parks, shopping centers, and grocery stores have not improved. The promise of the Nissen Wagon Works has been squandered.

Until S.G. Atkins CDC made its presentation at the September 2022 meeting of the Finance Committee, the development of what is left of the Nissen Wagon Works (an assortment of warehouses built too long ago to be modern but too recently to be historical) has not been on the City Council’s agenda.

Carol Davis’s (head of Atkins CDC) recent presentation made a case for utilizing 1539 Waughtown’s commercial potential. She gave examples of successful businesses in Raleigh and Charlotte that have monetized unused warehouse space. But it’s doubtful that a concept that works in vibrant sections of Raleigh and Charlotte will work in economically depressed Waughtown.

Entire communities, such as Waughtown and Easton View,have gone from low poverty to high poverty in the past 38 years. One tract in Waughtown saw its poverty rate climb from 11 percent in 1980 to 51 percent in 2018. Some tracts have undergone dramatic demographic shifts over the study period, but not others.

–The Persistance of Neighborhood Poverty, 2020

And Waughtown is an economically depressed pocket of the city (one of many). Waughtown Baptist Church and the First United Church of Christ are reminders of Waughtown’s past life as a prosperous, predominantly White working-class neighborhood. The former Southside Baptist on East Sprague and the former Urban Street Baptist tell the same story of a community in transition. Demographic shifts come with time, but Waughtown’s descent into a high-poverty neighborhood could and should have been avoided.

The Nissen Wagon Works’ roof collapse is symbolic of the economic collapse that has occurred on Waughtown, Sprague, and Cole Roads for decades. These are neighborhoods that have seen poverty levels soar during Allen Joines’ two decades as mayor. Atkins CDC’s plans won’t revitalize Waughtown, much less surrounding areas in South/Southeast Winston.

But the plans that N.C. A&T students produced in 2016; those bold plans for a possible library, community center, farmer’s market, green space/park, and other community-driven possibilities would have given Waughtown a much-needed shot in the arm. And in conjunction with other social programs, a preserved and revitalized Nissen Wagon Works could have increased wealth and lowered poverty in and around Waughtown.

The subject property is the site of the c. 1919 Nissen Wagon Works, an industrial complex with a high degree of historical and architectural significance. The Nissen company was begun in 1834 by John Phillip Nissen. Nissen’s company became known nationally for its superior wagons. The Wagon Works played an important role in the development of Waughtown and continued to produce wagons until 1948. By the mid-
1870s, the works was spread over a 600-acre tract on the north side of Waughtown Street and employed about one hundred men. In 1876, two years after the death of John Nissen, his sons, George and Will, were producing 427 wagons a year at an average price of one hundred twenty dollars each, realizing a profit of about $13,000.

The earliest remaining building in the complex dates to 1919, when the original structure was destroyed by a fire. The 1919 building is a one story brick structure with a low-pitched gable roof, and features a stepped parapet with corbelled comers. Small, decorative wagon wheels ornament the main fa9ade, the bricked-up windows feature segmental arch heads, and the interior features exposed beams. Later additions to the complex consist of several gable roof, metal buildings that date c. 1955-c. 1980. Ac. 1970 one-story, exposed aggregate concrete paneled building was added to the front elevation c. 1970.

Of outstanding significance is the smokestack (c. 1880), which is believed to have survived the 1919 fire and is original to the property. The structure is a brick, polygonal smokestack with a decorative star-shaped top mouth opening. This site is an anchor to the Waughtown-Belview National Register Historic District.

Some of the buildings on-site are highly significant while others are considered non-contributing. Because of the property’s high degree of significance, Historic Resources staff recommends special use zoning for the site (in order to distinguish which buildings will be retained), that the buildings on the site be kept in good repair, and that rehabilitation of the complex follow the Secretary of the Interior’s Standards for Rehabilitation.

-2013 Zoning Petition before the Planning Board