Derwin Montgomery is a man of many titles. He’s Reverend Montgomery to his congregation at First Calvary. He’s CEO to the board of the Bethesda Center, and he’s Representative Mongomery to his constituents in NC House District 72. Montgomery is also a co-owner of The Chronicle. If Montogomery finds a way to defeat four other contenders in the NC 6th District Democratic Primary, then he’ll be well on his way to becoming Congressman Montogomery.

I don’t have anything personally against Mr. Montgomery. I take no joy in criticizing him. He’s a smart and capable politician. In 2009 at mere 21 years-old, Montgomery was elected to the Winston-Salem City Council. At the City Council, Montgomery focused on housing and community development issues. The Enterprise Center and Union Station are two of Derwin’s signature achievements.

The Montgomery Plan will fight to raise minimum wage so that families can have enough to live. Listen in and see why you should be #AllinforDerwin pic.twitter.com/dqGiubYlft

My problem with Montgomery is his close alliance with Mayor and business leader, Allen Joines. Derwin Montgomery played a leading role in Allen Joines’ Poverty Thought Force. He currently serves on the governing board of the Alliance’s Partnership for Prosperity. In Winston-Salem, you can’t befriend Allen Joines without betraying the poor and working-class.

The March 2016 meeting of the Winston-Salem City Council, Finance Committee, illustrates the limits of Derwin Montgomery’s affordable housing advocacy. When the big boys from the Wake Forrest Innovation Quarter asked the City Council to renegotiate terms of their agreement reimbursement assistance incentive agreement with the City, they got what they wanted without making a serious commitment to building workforce housing.

If it goes to Council as it is, the way it is now, I will have to respectively not support it. Not that I don’t support the project and I don’t support this, but I think that if we have made certain commiminents as a community, as a city, we have to stand firm on certain principles…”

Then, at the April City Council meeting, Allen Joines announced that the parties had got together and agreed on compromise language on a conference call. Whatever happened to open meetings?

After publicly challenging Wake Forest at the previous meeting, Montgomery made the motion to approve the City’s incentive package with the WFIQ. Then he thanked the representatives of the Innovation Quarter. He said that “everyone wins in this process.” The incentive package passed unanimously.

It appears that Wake Forest got what it wanted from the City but made a concession by agreeing to start a minority business accelerator. Treating Wake Forest with kid gloves no doubt helped Montgomery get Wake Forest’s support for his East End Masterplan.*

It’s to Winston-Salem’s great shame that there isn’t any workforce or affordable housing in the Innovation Quarter, except some small portion of Goler CDC’s properties. The Wake Forest Innovation Quarter was built with millions of historic tax credit dollars and millions more in City and County taxes. But the average Winston-Salem, Forsyth County resident couldn’t possibly afford to live there; much less residents living just on the other side of Highway 52.

While Representative Derwin Montgomery is moving up, many residents in Winston-Divided are stuck in concentrated poverty. In 2016, NC Policy Watch’s Budget and Tax Center found that 14 neighborhoods in Winston-Salem contained high concentrations of poverty. That’s 33,140 people (disproportionately Black and Latinx) folks suffering on a daily basis. Concentrated poverty has increased four-fold since 2000.  And as historian Elizabeth A. Herbin-Triant wrote in a recent article, upward mobility is very difficult in segregated, high-poverty neighborhoods.

While I wish Rep. Derwin Montgomery good luck as he fights to win the NC 6th Congressional race, I’m more concerned with the often ignored folks in East Winston who aren’t going anywhere. 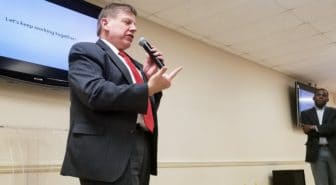 
*A friend of mine that I trust told me that they had a meeting with Eric Tomlinson years ago. He/she asked Tomlinson to build affordable housing in the Innovation Quarter. But Tomlinson replied, “that’s what the East End is for.”