The nation voted on Tuesday. If we were living in a competent democracy, all the votes would have been counted, and the final tallies would have been known days ago. But we’re living in America. We don’t know to a certainty who won the presidency, much less some tightly contested local races.

Elections are a barometer, a reminder of the health of our democratic system. They’re also a window into the health of our local media. Personally, I found the Winston-Salem Journal and The Chronicle’s coverage of this election cycle to be mediocre at best. Both the paper of record and Winston’s African American newspaper are on a decades’ long decline. On election-eve, the Journal’s Scott Sexton wrote a shit piece about a small dog, while The Chronicle endorsed some right-wing Republicans and some Democrats. Triad City Beat’s election guide continues to be the best resource for local elections, though I wish it contained a few more pages.

The Chronicle’s Facebook live shows have been a surprisingly good source of information and debate, an exception to the new desertification process taking place in Winston. But Wednesday night’s post-election Chronicle Live was infuriating. First, I don’t understand why The Chronicle’s hosts, Derwin Montgomery and Algenon Cash, interviewed four white Republicans (Allen Joines was a Republican before running for office) and refused to ask them any tough questions. The free pass The Chronicle gave to Joyce Krawiec and  Jeff Zenger was particularly egregious.

Both incumbent State Senator Joyce Krawiec and relative political newcomer Jeff Zenger are on the far right. They’re for re-opening the state at all costs; COVID-19 be damned! And both Krawiec and Zenger ran dirty campaigns, smearing their opponents as liberals eager to defund the police and possibly end civilization as we know it. Zenger accused his opponent Dan Besse of defunding the police-when, in reality, Besse and the rest of the Winston-Salem City Council engaged in a budgetary gimmick. The Council moved $1 million that the WSPD could not spend to fund poverty reduction initiatives and raise the minimum wage City workers receive to $14 per hour. Status quo Democrat, Dan Bessie, does not support defunding the police. But Jeff Zenger doesn’t let inconvenient details get in the way of a good campaign message.

As bad as Zenger’s attacks against Dan Besse were, Joyce Krawiec’s campaign against challenger Terri Legrand was much worse. Krawiec’s attack ads began with infantile smears against Legrand and then went after Legrand’s integrity. Krawiec labeled Legrand “scary Terri” and said that she “stood with criminals.” The most offensive ad that she aired featured fictional inmates in orange jumpsuits endorsing Terri Legrand. Krawiec’s campaign ads were the dirtiest, most offensive campaign ads I’ve seen since local GOP hack Vernon Robinson ran for Congress.

Shame on Joyce Krawiec for smearing Legrand. Shame on The Chronicle for not calling her out for the dirty campaign she ran. Shame on Algenon Cash for endorsing Joyce Krawiec. Krawiec represents Advance, Belews Creek, Bermuda Run, Cooleemee, Clemmons, Kernersville, Mocksville, Walkertown, and Winston-Salem-in that order.

Krawiec, even more than Zenger, weaponized the Black Lives Matter movement against her opponent. She didn’t condemn or distance herself from a mailer claiming that Legrand believes “rapists deserve more protections than rape victims.” That outrageous claim is a is all too similar to racist smear campaigns that have been common throughout North Carolina’s history. Krawiec’s campaign, in this observer’s opinion, was a 21st century version of the white supremacist campaign of 1898 that led to the infamous Wilmington Coup. Obviously, The Chronicle needs a history lesson. 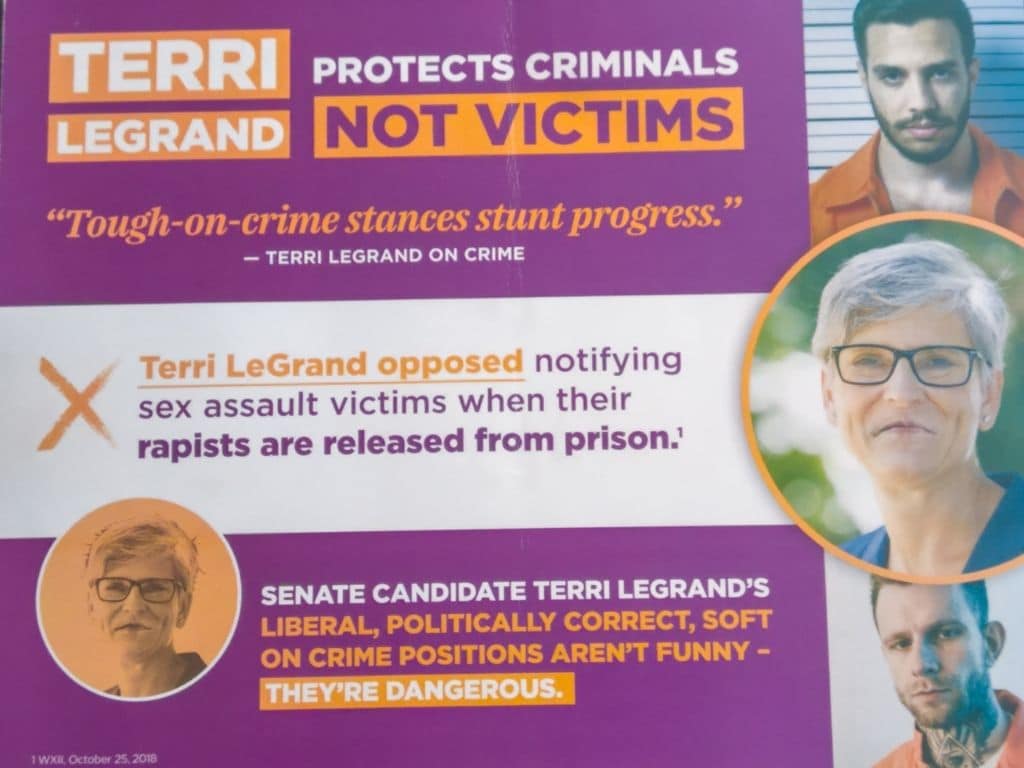