On March 13, Darryl Hunt’s body was found in a shopping center across from the Lawrence Joel Coliseum. That was a sad day for Winston. Darryl Hunt served nearly 20 years for a rape and murder that he didn’t commit. The Forsyth County D.A.’s Office ignored evidence that would have led them to the real perpetrator, Willard Brown. They put a collection of known liars on the stand (including a member of the KKK) and twice convinced a jury of twelve that Hunt was the monster that raped and killed Deborah Sykes, despite there never being any evidence that that was the case.

Hunt’s case is now infamous. It was made into an HBO documentary. Most people in Winston know about the trials of Darryl Hunt. But Darryl Hunt wasn’t the only black man to be wrongfully convicted in Forsyth County in the 1980s and 1990s. For over ten years now, activists in Winston have been working to free Kalvin Michael Smith.

The state maintains that on December, 9 1995  Kalvin Michael Smith brutally beat Jill Marker and robbed the Silk Plant Forest store. Despite two independent investigations concluding that there wasn’t any “credible evidence” against Kalvin Michael Smith (by the Silk Plant Forest Citizens Review Committee and by retired FBI agent Assistant Deputy Director Chris Swecker) Smith continues to languish in jail. Despite the best efforts of Smith’s supporters in Winston and the Duke Innocence Project, Smith’s appeals have all been denied.

Perhaps the our community has wrongful conviction fatigue.  John Robert Hayes’ name should have been used in the same sentence with Darryl Hunt and Kalvin Michael Smith years ago. Activist in Winston should have rallied around Hayes, like they rallied around Hunt and Smith. John Robert Hayes does have the support of the Wake Forest Innocence and Justice Clinic. They’re filling appeals on his behalf, but activists haven’t hit the streets of Winston on Hayes behalf.

Hayes has maintained his innocence ever since he was convicted on this very day, July, 19, 1994. Hayes was convicted of murdering two men as they came out of an illegal East Winston drink house in July, 1993. It appears that the police once again got the wrong guy. It’s sad that activists in Winston haven’t rallied behind Hayes whose claim of innocence are as credible as those of Hunt and Smith.

But after serving more than 20 years of a double-life sentence, Hayes now has some powerful legal advocates behind him. Wake Forest’s Innocence and Justice Clinic is handling Hayes’ appeals. I trust Wake’s Innocence and Justice Clinic. Their mission is to free innocent men and women who have been wrongfully convicted. I’m confident that Mark Rabil and the other professors/attorneys at Wake Forest Law School have exhaustively reviewed Hayes’ case. If there weren’t red flags throughout his case, alerting them that John Robert Hayes was innocent, then they wouldn’t have chosen to represent Hayes.

It’s not just that prosecutors did one thing wrong in Hayes’ case, there are multiple examples of improper/unethical behaviors exhibited by the prosecution and the defense. Mark Rabil of Wake’s Innocence and Justice Clinic maintains that Hayes’ case has many of the hallmarks of a wrongful conviction, “…mistaken eyewitness testimony, the misrepresentation of forensic testing, the failure to disclose exculpatory law enforcement reports, and inadequate lawyering.” 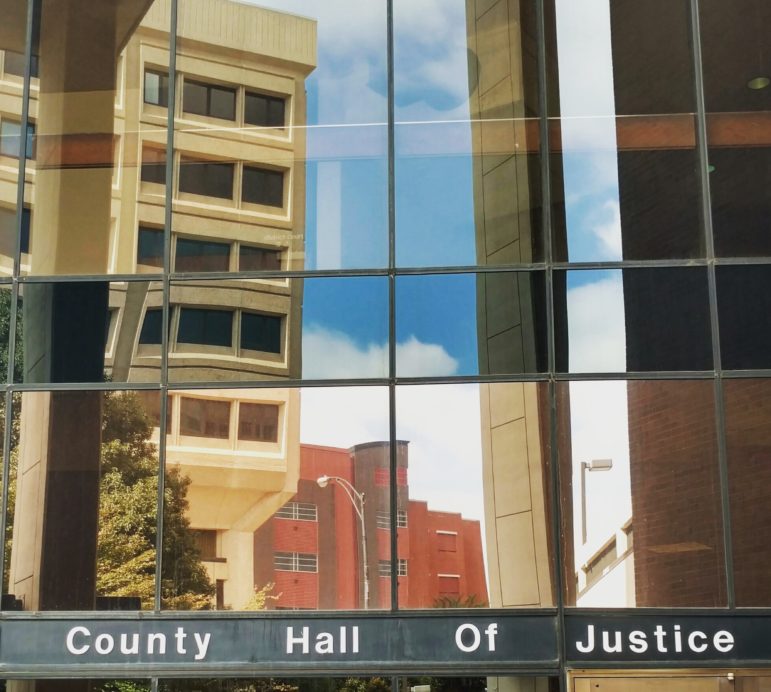 The Winston-Salem Journal’s legal reporter, Michael Hewlett has done some excellent reporting on John Robert Hayes’ case. The facts of the investigation are unbelievable. A third person was shot at the Double Deuce, but only suffered a minor wound. That victim maintains that a different person was the shooter. But he isn’t the only one, all together 10 witnesses have named someone else as the shooter and gave possible motives for the shooting.

Hunt, Hayes and Smith should be linked as the Forsyth County Three. Serious investigative reporting is needed to understand how these three black men were wrongfully convicted in a roughly ten-year period (from the mid-1980s to the mid-1990s) in Forsyth County. That period was certainly a time of racist injustice in Winston-Salem, Forsyth County. As long as Kalvin Michael Smith and John Robert Hayes are still behind bars racial divisions in our city can’t heal.

Read Michael Hewlett’s Winston-Salem Journal articles on John Robert Hayes, much of this article was based on Hewlett’s reporting; recent article, Oct 2014 article.