The W-S Journal’s Wesley Young estimated a hundred people crammed into HAWS’ tent at the former Brown Elementary School on a chilly Tuesday afternoon. HAWS’ modest-sized tent was packed with local politicians, non-profits, and developers. Outside the tent, a group of protesters demanded that public housing residents be given a piece of the CNI pie. The challenge going forward is distributing power in East Winston and citywide from a small group of insiders to the entire community. That is the only way that ‘transformation’ is possible.

Just across the street from the groundbreaking, the poorly maintained Colony Place Apartment complex is a reminder that old, substandard housing is a problem throughout East Winston; it’s not a problem unique to Cleveland Avenue. The Choice Neighborhood Initiative will have a monumental impact on Cleveland Avenue, but its effect on surrounding neighborhoods is less certain. It may lead to displacement and gentrification, an outcome that HAWS must work to minimize.

HUD’s choice to invest $30 million into the Cleveland Avenue Homes community’s ‘transformation’ effectively condemns other aging public housing properties, such as Sunrise Towers, Crystal Towers, and Piedmont Circle, to a status quo that is unacceptable.

Allen Joines and his developer partners at the Winston-Salem Alliance could have included the Liberty Street Corridor and Cleveland Avenue in their downtown redevelopment project. They could have located their new baseball stadium in the Northeast Ward to connect it to Downtown Winston-Salem, but they didn’t. Instead, they razed the Watkins Street neighborhood (aka, the Black West End) to connect the Holly Springs and West Salem neighborhoods with the city’s downtown core. The urban core-North Patterson, Liberty Street, and Cleveland Avenue were not priorities, despite being in worse shape than downtown.

For over a decade, the Housing Authority and their allies in City Hall have been counting on the federal government to finance the redevelopment of Cleveland Avenue. But due to soaring building material and construction costs, the Housing Authority is $30-$40 million short of the total needed to complete its Choice Neighborhood Initiative. The Choice Neighborhood Initiative’s fiscal deficit was not mentioned during Tuesday’s groundbreaking.

We need a transformation of values on the federal, state, and local levels to fund the upgrading of existing public housing and the construction and acquisition of new affordable housing. 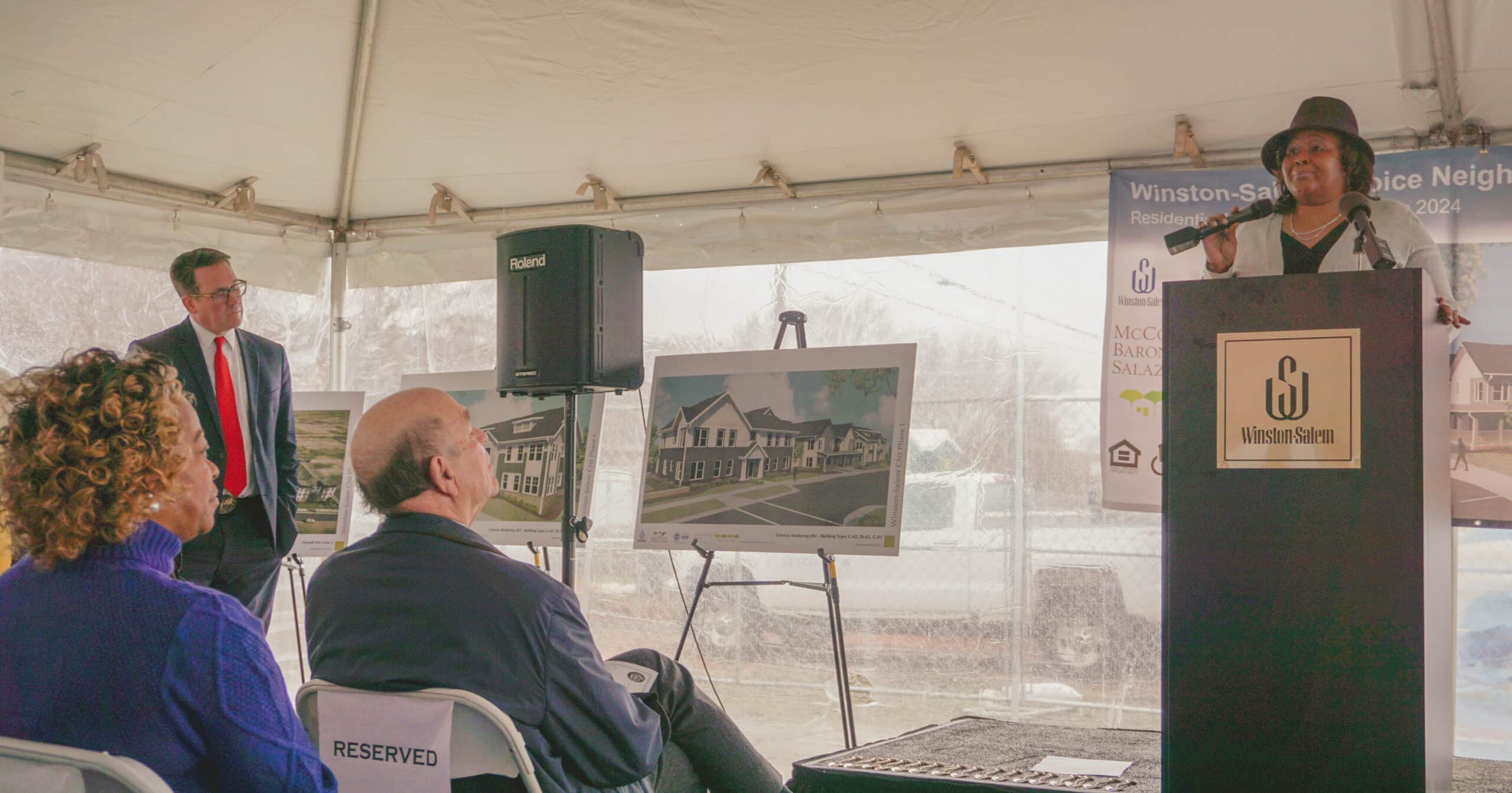 I think it’s interesting that we find ourselves on this side in the month of December, as it was December 5th, 2014, nearly eight years ago, to the day the housing authority closed on the purchase of this property from Shiloh Baptist Church. Remember that, Larry? And it was another December day, December 20th, 2016, exactly six years ago this month, when a fire destroyed that original school building. And I remember standing right over there and watching the fire smolder and wondering whether anything would ever rise from those ashes.

And today answers that question with a resounding yes. As many of [you know] this project is being funded through HUD’s Choice Neighborhoods Initiative. CNI is the acronym that we use for the Choice Neighborhoods Initiative, and that’s a HUD grant program targeted at redeveloping aging public housing, and in our case, that aging public housing is the Cleveland Avenue Homes community.

That targeted redevelopment is part of a comprehensive plan to transform a community by investing in the people who live in that community and in the neighborhood, which surrounds it, not just the housing. Our CNI project is somewhat unique in that we are able to pursue a build-first approach, meaning the first phase of housing is being constructed here, an offsite location a few blocks away from Cleveland Avenue Homes, and that approach has allowed us to retain our existing housing longer, minimizing disruption to Cleveland Avenue Homes families, and supporting our theme of reconnecting neighborhoods. But make no mistake, while we are breaking ground today at our offsite phase, future phases are coming.

As construction work at Cleveland Avenue Homes proper, we’ll commence in the next phase. And I’m already looking forward to the phase two groundbreaking, which will happen on-site, and we are determined that that’s gonna be a nice spring day.

In the interim, please know that other equally, if not more important, work is already happening onsite at Cleveland Avenue Homes. Our people partner, Urban Strategies, has been embedded in the community for two years, working out of existing apartments, engaging with residents, meeting them where they are, focusing on education, workforce development, access to healthcare, access to childcare, access to transportation, and public safety. Change is happening, and I’m so thankful to you for joining us today to celebrate that.

This project has to be transformational. So while this is a point in time and this is an opportunity to celebrate, this is nowhere near the end. So we’re gonna keep this momentum going. Thank you all for being here today. Again, I reiterate Senator Lowe’s apologies; he had something come up. At this time, I’m gonna go ahead and turn it over to Mayor Joines. 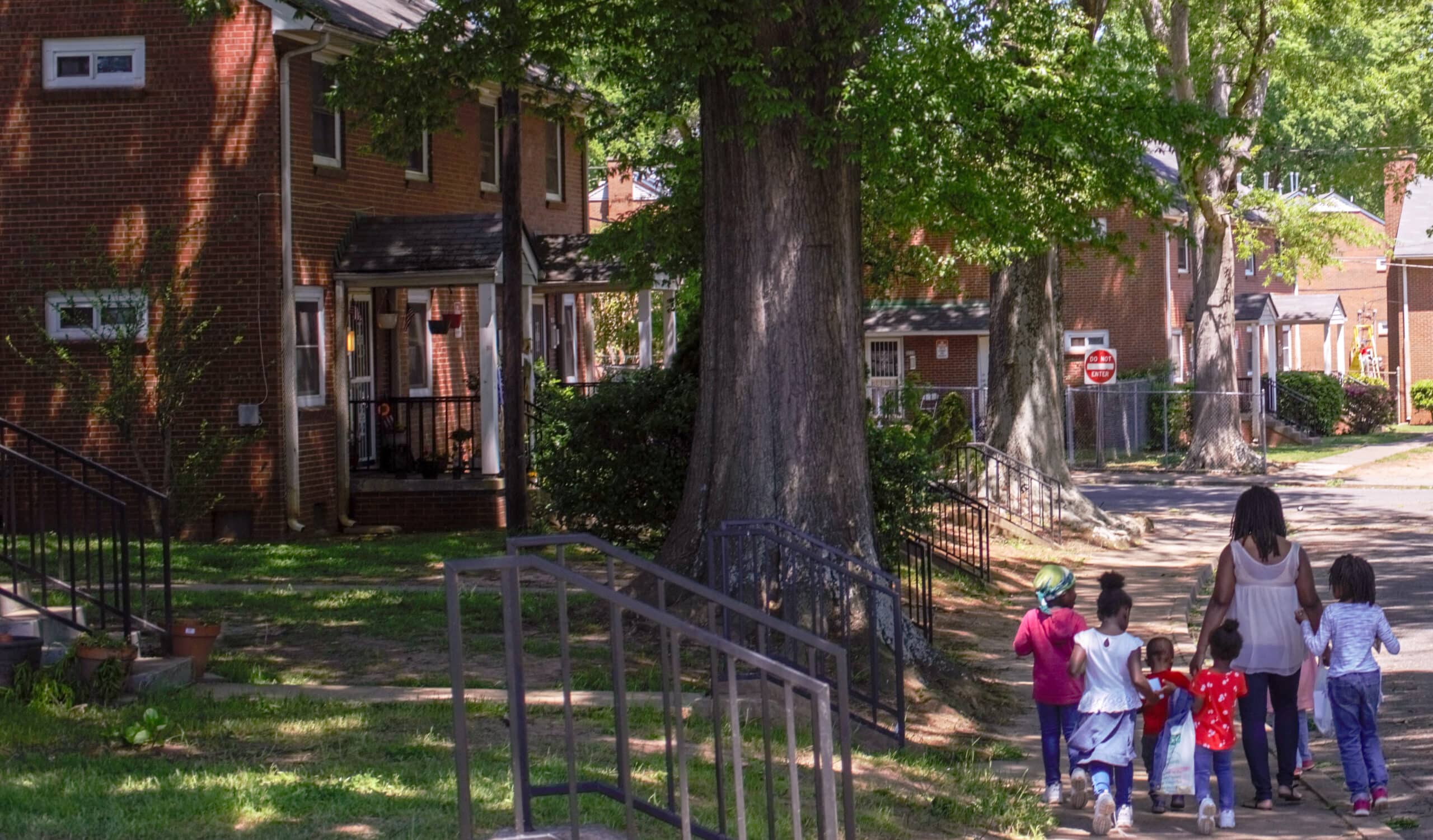