The Housing Authority of Winston-Salem appears poised to purchase the former SECU Commons property near Old Greensboro and Reidsville Road. According to HAWS’ board meeting notes, HAWS is in the process of acquiring 15 newly renovated apartment units and the rest of the former SECU Commons’ mix-used campus. Eventually, HAWS envisions developing additional affordable housing on the currently unused portion of the 16-acre site situated in the Northeast Ward, just minutes from downtown.

“Mr. Cheshire did a site visit to The Commons and provided photographs.
Awaiting NCHFA [North Carolina Housing Finance Agency] modification of eligibility restrictions before we can bring a resolution and purchase and sale agreement to the Board for approval.” -HAWS meeting notes, Nov 2, 2021 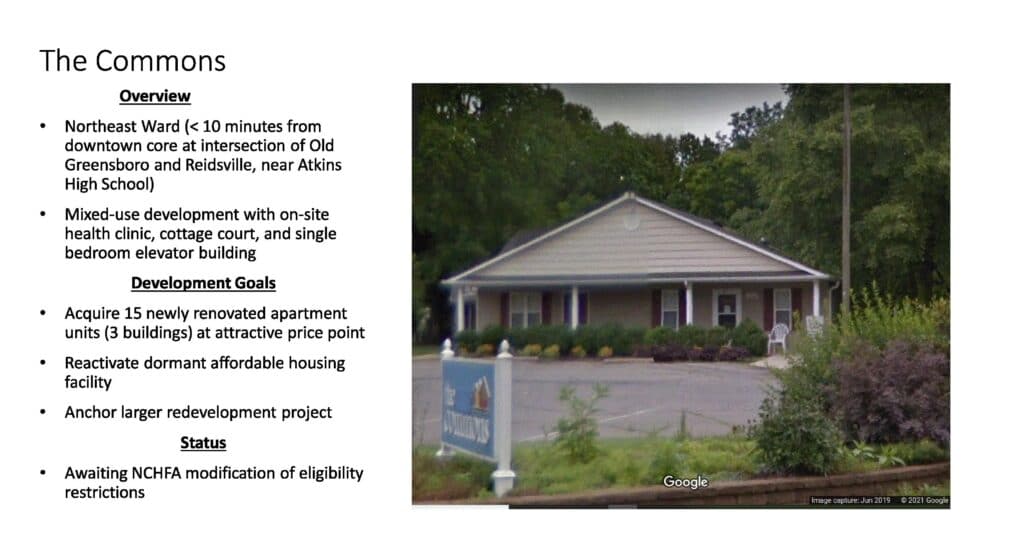 I’ve driven past the 16-acre property near Petree Elementary and Atkins High School many times without paying much attention to the former SECU Commons. It sits off the road, so you don’t know what’s there unless you intentionally snoop around the campus-something I did recently. I assumed the SECU Commons was similar to the SECU Family House, a “comfortable alternative to a hospital waiting room or an expensive hotel for people facing the challenge of out-of-town medical care.” It’s not. The short-lived SECU Commons had a much more ambitious mission during its brief life.

The property was first developed by Human Service Alliance in the mid-2000s. It became the SECU Commons in 2015 (owned and managed by the North Carolina Housing Foundation, Inc). The SECU Commons’ mission was to provide “housing, training and support services for homeless families, foster care youth and Autism spectrum young adults.” With a commercial kitchen on campus and an educational building, the SECU Commons sought to provide care and training to its residents, not just housing.

It was housing first, plus benefits. Mayor Joines’ embraced SECU Commons when it opened in 2015. SECU Commons complemented the City’s plan to end chronic homelessness. 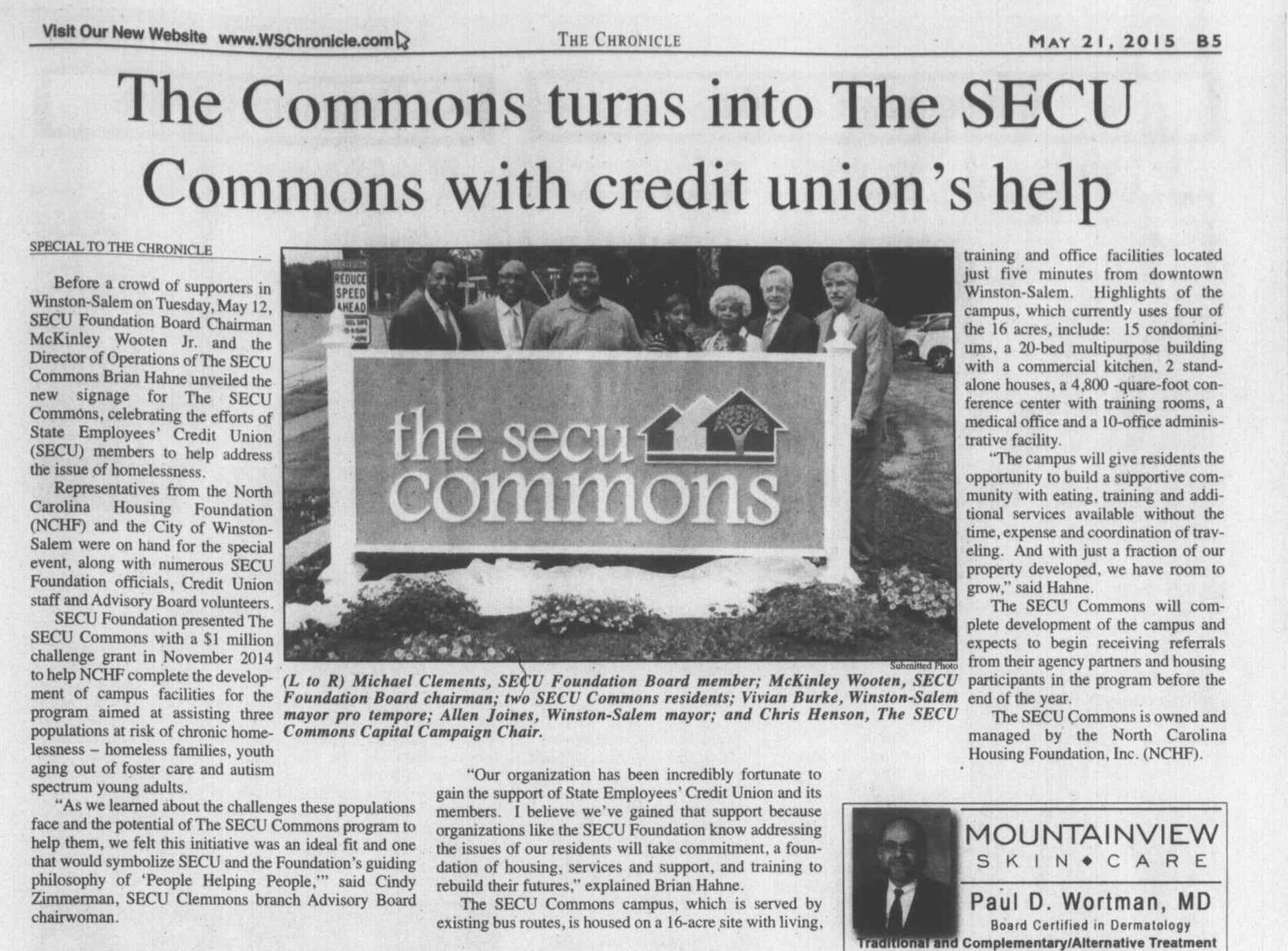 The SECU Commons delivers that home – an integrated campus with housing, supportive services and a community environment. The program is consistent with the housing-first strategy proven effective throughout our country and supported by our Ten Year Plan to End Homelessness.

Located on a campus-like property five minutes east of downtown Winston-Salem , our objective is to transform highly vulnerable people to be:

Employed or financially self-sufficient
Permanently housed
Net contributors to community services vs. net consumers of community services
The SECU Commons employs the most effective methods to address residents’ needs and brings together a variety of service organizations and the local community to help and benefit.

Offer services coordination, skills training and safe, family-friendly housing on one campus:
Leverage the collective expertise of service organizations to:
– Deliver training and services efficiently in one location
– Enhance programs with cross agency cooperation
Invest in a campus with the capacity to expand
Utilize training, facilities and community support to reach financial self-sufficiency.

Though the Mayor and then-Mayor Pro Temp, Vivian Burke, were happy to embrace SECU Commons initially, they stood back when the project aimed at housing some of our most vulnerable citizens collapsed in just a few short years.

It’s worth noting that the City of Winston-Salem funded the nearby Emmanuel Retirement Village to the tune of $2.5 during roughly the same time frame that SECU Commons collapsed. Emmanual Retirement Village is approximately a mile from SECU Commons. Emmanual consists of “two-story multi-family structures containing 28 one-bedroom units, 11 duplex structures containing 22 two-bedroom units, and a community center for complex residents and the surrounding community.” It’s market-rate senior housing in a food desert with a modest affordable housing component funded by taxpayers. It provides far less community benefit than SECU Commons did.

In 2019 a Durham-based group tried to purchase SECU Commons and convert its campus into a rehabilitation facility. TROSA got the Planning Board’s approval. But Mayor Pro Temp, Vivian Burke and Councilmember Annette Scippio crushed TROSA’s rezoning request when it came before the City Council. Scippio’s remarks are worth remembering. East Winston has many needs (housing, grocery stores, shopping centers), but more social service-oriented facilities aren’t one of them.

“We consider historic actions. This is a land-use decision. Is this the appropriate use for this particular activity? It would seem so. But 50 years ago we made a decision as a council to bulldoze all of East Winston. And what came back were other land-use decisions. Which was, to house social service agencies in East Winston. Land-use decisions, those decisions shaped the image of the eastern part of our city. We have the opportunity to look completely at our city and stop reinforcing a negative image for parts of our city. -Annette Scippio 5/6/2019

As 2021 comes to an end, HAWS has an opportunity to reactivate the old SECU Commons campus for the benefit of the entire community. But it’s a shame that the City of Winston-Salem didn’t act years ago to keep SECU Commons from collapsing. In recent years, the City of Winston-Salem has stated that affordable housing is its top priority. But the actions and inactions of Mayor Allen Joines and the City Council say otherwise.