I hate to see historic buildings bulldozed. Many excellent buildings have been lost over the years in Winston to make room for roadways and parking lots.

Historically, it’s been East Winston where homes and churches have been destroyed in the name of progress. But a curious thing is occurring in the heart of Downtown Winston. First Baptist Church on Fifth Street just started demolishing two of its three buildings on its own accord.

Last June, one’s of Winston’s most prominent churches voted to tear down two buildings that housed a chapel, gymnasium, and a daycare facility. The daycare closed before the end of the year, to the dismay of many local parents. But perhaps those parents will enjoy the new atrium and “sacred garden” that will replace those well-built, multi-functional buildings that are being reduced to rubble.

For those who haven’t been following this story, here’s the Winston-Salem Journal’s coverage of First on Fifth: the congregation’s dilemma, the vote, closure of their daycare, parent’s dismay, the process of destruction begins. 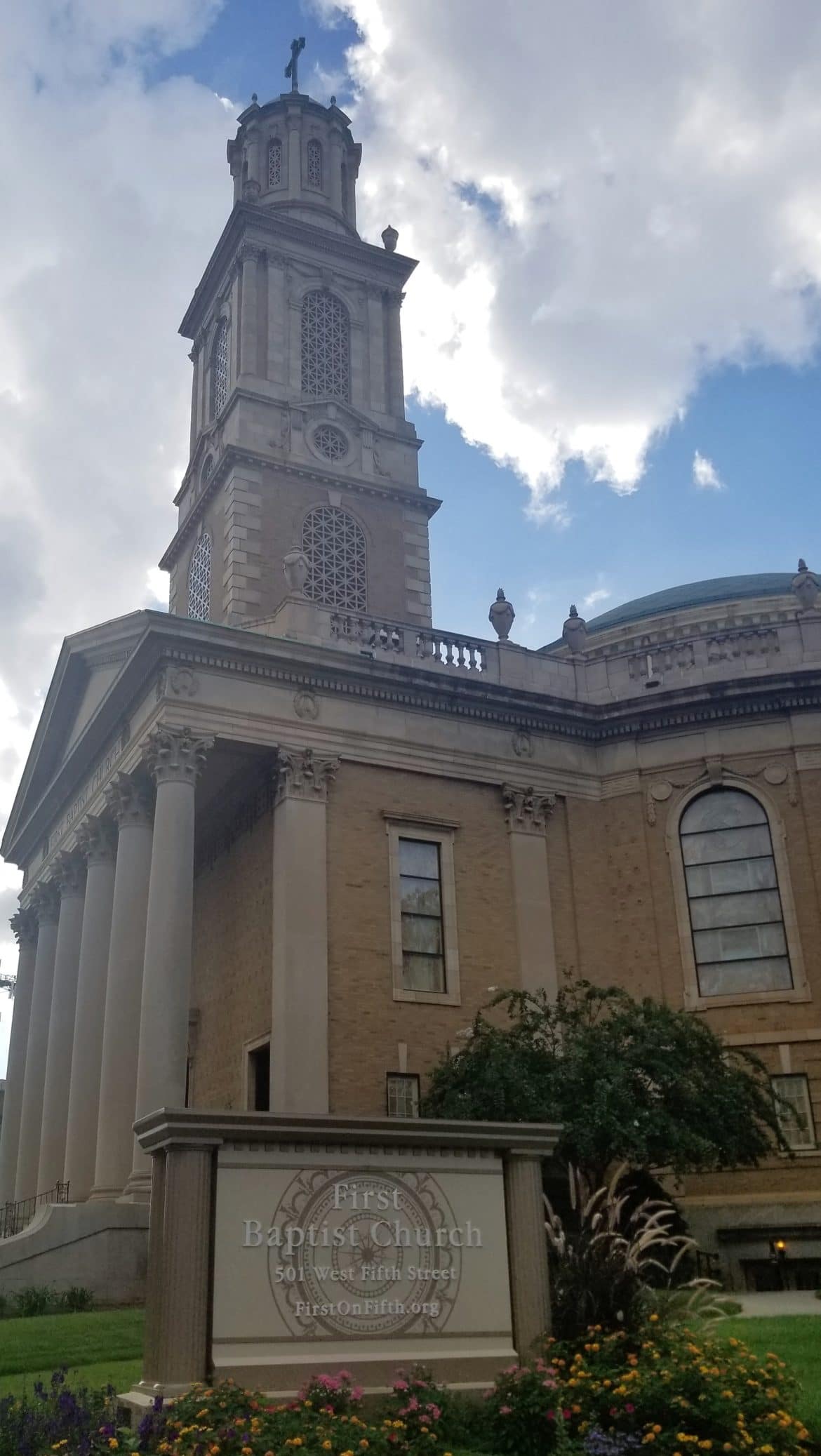 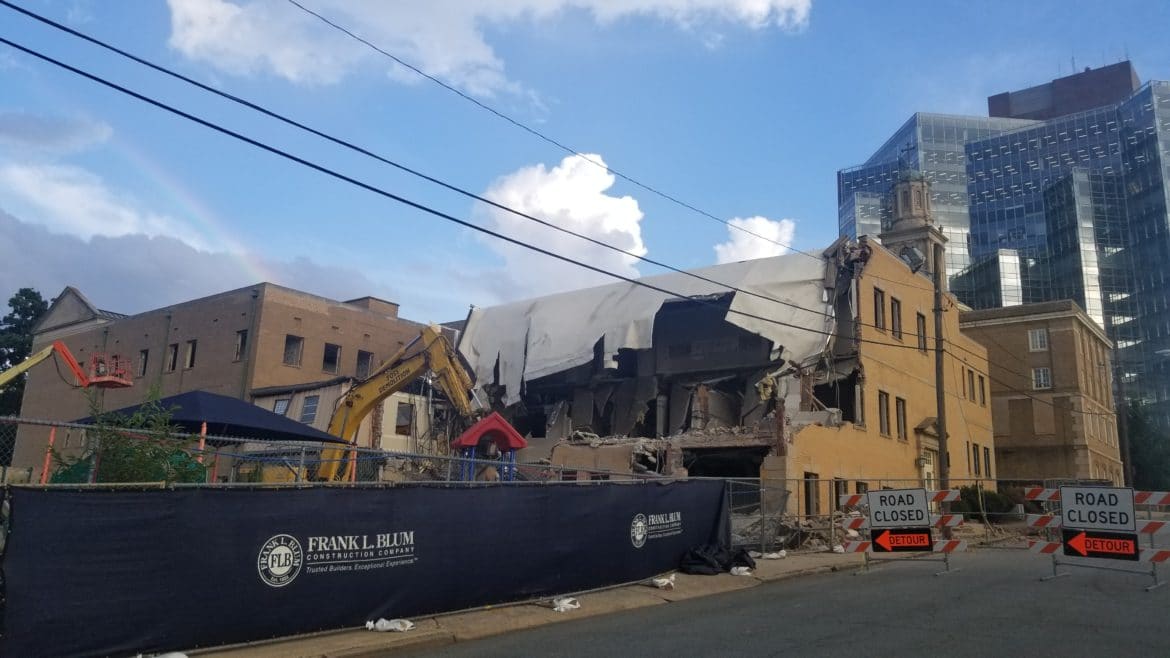 Ironically, the demolition of two-thirds of First on Fifth started on September 11. Not a good day to begin tearing buildings down.

Earlier in the summer, Blum Construction began preparing for demolition. Across the street, they renovated the GMAC Building and the Central Library, just down the road. Razing a building should be the last option.

But what do I know? The pastor of First Baptist Church on Fifth Street thinks it’s a swell idea:

Perhaps you remember the context for these four words. A year ago this Sunday, Kelly Auditorium was packed to the gills as the Special Committee on Facilities and Mission offered a presentation to the congregation regarding the future of our church. There, we all heard the proposal to restore the exterior of our historic Sanctuary building, reduce our cost by razing Buildings B & C and draw to a close the ministry of the Children’s Center, renovate Building A to create a standalone and fully functional space for our ongoing ministries, and reimagine the landscape of our life together with the addition of an atrium and outdoor sacred garden.

Members of First on Fifth also believe that destroying two well-built buildings is a good idea:

Now, the time is right for us to move boldly with confidence in the Providence of God and as heirs to our history of innovation, leadership and compassion in doing the work of the Lord in Winston Salem. -Randy Peters

I have no doubt this process both honors the rich heritage of First on Fifth while also positioning our church to enjoy a healthy future. -Larry Hovis

I cannot fully express my excitement about what the future of First Baptist is going to be in downtown Winston-Salem, and I look forward to walking that journey with you. -Preston Cook

The Lord works in mysterious ways, such as the destruction of buildings that could be helping the community.

Pastor Emily told the Winston-Salem Journal that all options to obtain grants or find a suitable partnership were exhausted. I find that hard to believe. Churches can have second lives.

Many buildings located near First on Fifth Street have been repurposed over the years: the Winston-Salem Journal’s property across the street, the former YMCA on Spruce Street (currently residential), and the old Carnegie Library on Third Street, that is now a Catholic chapel.

They have an excellent location, and until recently they had two quality brick buildings, with nearly limitless possibilities.

Right now they have rubble. They’ve gone and done something that no church around here that I know of has done. They destroyed buildings that could be used to meet people’s needs.

Adding insult to injury, they have described the whole process of destruction in the most positive terms. The words, “restore, reduce, renovate, reimagine” ring hollow to me. Clever marketing is no substitute for a daycare, a gym and classroom space.

Surely First on Fifth could have passed the collection plate around Downtown Winston and found the resources needed to keep those two buildings around for decades to come. 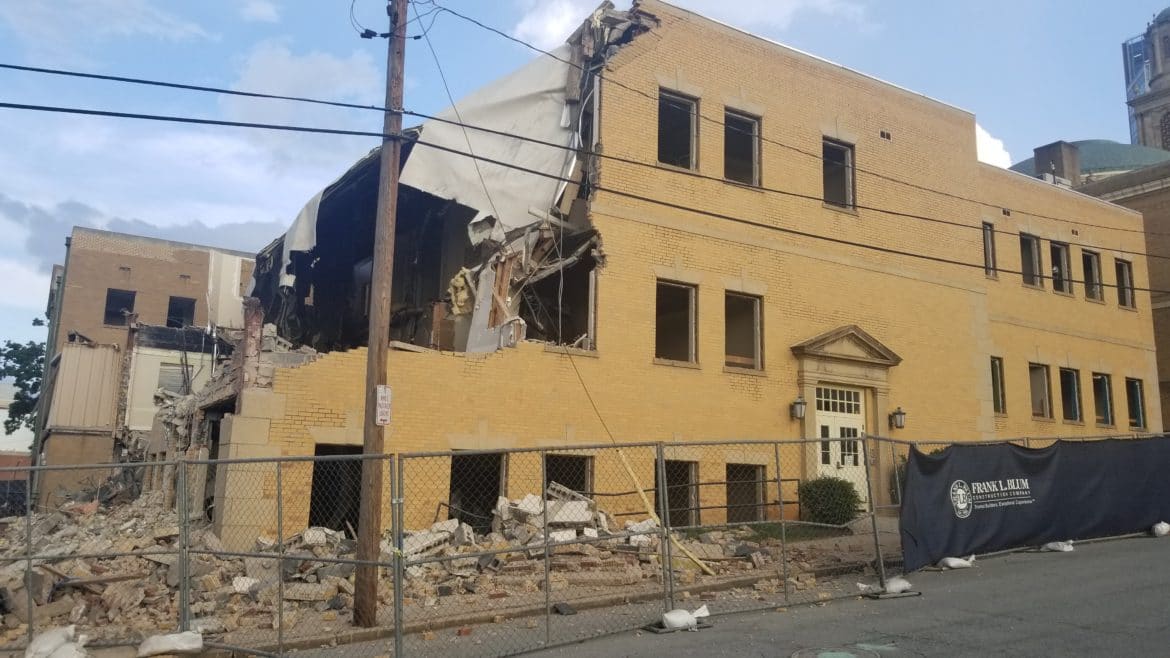