The Five Row neighborhood was razed sometime in 1960 to facilitate the completion of Silas Creek Parkway. Five Row was a relic of the past, when rich white homeowners needed scores of African-American servants to maintain their privileged lifestyles. Hopefully a few of the thousands of motorists who drive on Silas Creek Parkway each day will notice the new historical marker honoring Five Row and learn a little about that long forgotten community.

Everything changes over time. In 1967, the Reynolda House, which was completed fifty years prior, completed its reinvention from a country estate to an art museum. Reynolda Village was transformed from a self-sustaining village into high-end restaurant, retail and office space. But there was no second act for the Five Row neighborhood. Like so many other African-American neighbors in Winston (Depot Street, Belews Creek, West End) Five Row was unceremoniously bulldozed in the name of progress.

The Reynolda House is a beautiful, sprawling estate, built from the fortune R.J. Reynolds amassed selling tobacco products. Camel cigarettes were introduced to the public with a pioneering ad campaign in 1913. The Reynolda House was completed just four years later in 1917. This period is referred to by historians as the nadir of race relations in the United States. A bleak period for African-Americans, before the dawning of the civil rights movement. A law formalizing neighborhood segregation in Winston was passed by the city council in 1912.

The two races were separate and anything but equal. Reynolds’ massive fortune was made in no small part by exploiting African-American laborers. African-American laborers were at that time the majority of R.J Reynolds Tobacco’s workforce. But after working in RJR’s factories many African-American workers returned home to squalor. Their homes in neighborhoods just east of Reynolds’ factories often didn’t have the basics that we take for granted today. Streets went unpaved, but because of a high demand for housing, rents were often high.

Likewise the Reynolds’ life of leisure depended principally on African-Americans labor. The black servants that worked for decades at the Reynolda House until now, have received little or no attention. They were the ones who kept Katharine Reynold’s ambitious little village running. The workforce at Reynolda, similarly to the workers at RJR’s factories lived in modest wood houses without running water or electricity. Five Row to its credit, did have a church and a school.

But where no expenses were spared at the Reynolda House, relatively few resources were spent building and maintaining Five Row. Viewed from Five Row, the Reynolda House must have looked like a monument to  greed and racism. The Reynolds and later Babcocks lived in Gilded Age opulence while their workers at Five Row didn’t even have indoor plumbing. 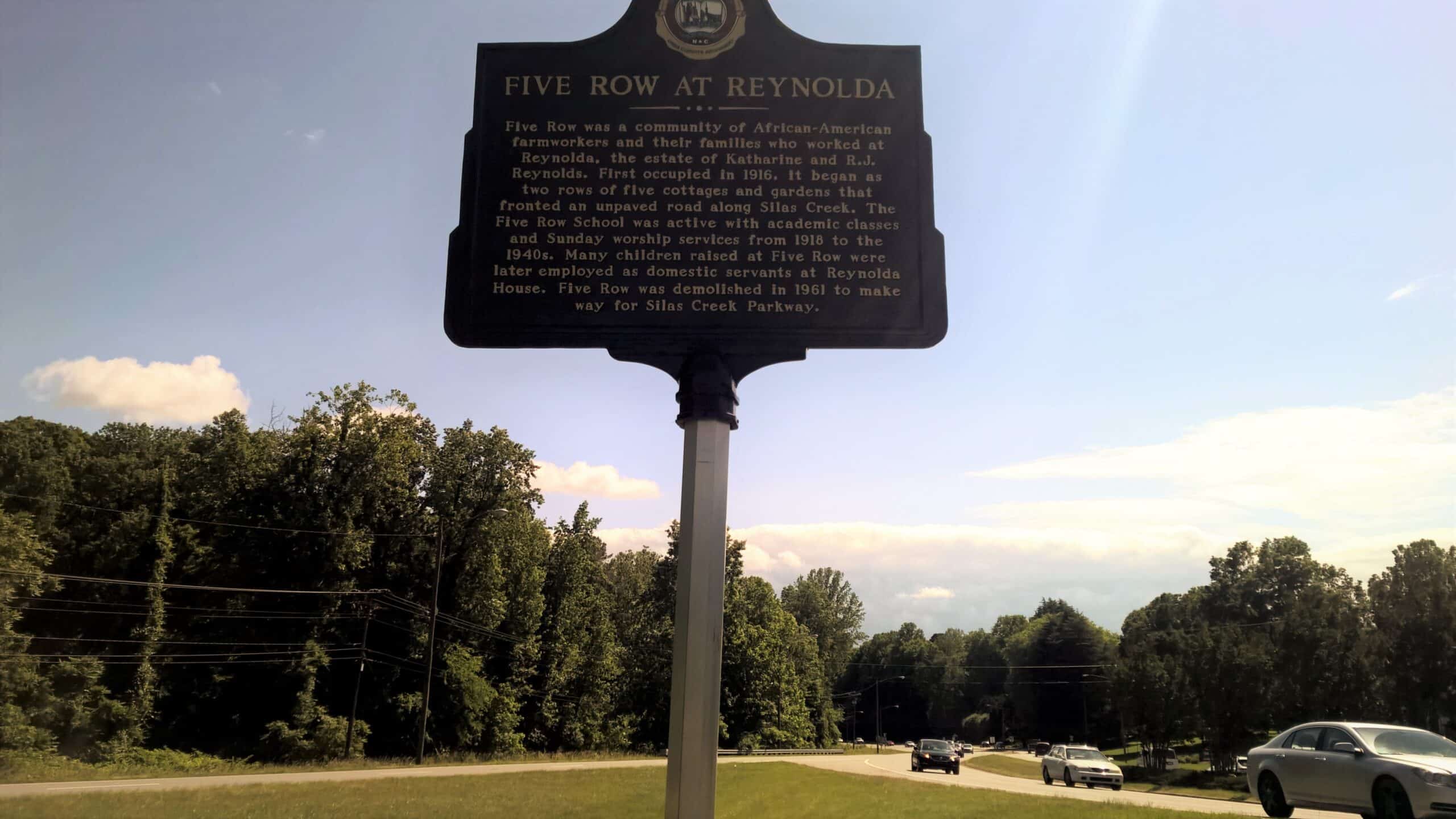 It’s great that Five Row now has a historic marker. But racism and appalling inequality are problems that Winston is still plagued by today. A more honest slogan for Winston is the city of Arts and Inequality. Look at the affluence in the Innovation Quarter and the concentrated poverty a half a mile away at MLK and Cleveland Avenue (As Triad City Beat did recently).

The residents at the Innovation Quarter aren’t as rich by any means as the Reynolds were in the early 20th century. Likewise the poor on Cleveland Avenue aren’t as poor as the former residents of Five Row. But the gap between the rich and poor in Winston continues to be the city’s defining problem.