Crystal Towers is conveniently located in the heart of Downtown Winston-Salem, at 625 W Sixth St. The Housing Authority of Winston-Salem had a buyer lined up to redevelop Crystal Towers, but HUD wouldn’t let them sell Crystal during a pandemic.

Crystal Towers’ residents are just a short walk from the Central Library (when it reopens), restaurants, and the modest amenities that DTWS has to offer. But crossing Sixth Street is no easy task for many of Crystal’s approximately 200 residents, slowed down by age and/or various medical conditions. Often motorists in a hurry to get in or out of downtown exceed the speed limit on Sixth Street on their way to Trade or Broad Street.

But, long overdue pedestrian crossing improvements are being slowly rolled out by the City. Last December, yield signs were placed on both sides of Sixth Street, just before Poplar Street. City Hall acted after several Crystal Towers residents spoke to the Public Safety Committee last December.

New signs are up in front of Crystal Towers. One small victory this holiday season. Many battles left to be fought. pic.twitter.com/ZAucIHO6Kc

Earlier this month, Jeff Fansler of the NCDOT, informed the Public Works Committee on the status of Priority Pedestrian Improvement Projects. Mr. Fansler said that further improvements were about to be made in front of Crystal Towers. Rectangular rapid flashing beacons (RRFB) will replace the yield signs currently in place by the end of the month, Fansler said. According to Mr. Fansler, the rectangular rapid flashing beacons have a much higher compliance rate than ordinary traffic signs. Being able to press a button and safely cross Sixth Street will bring some peace of mind to Crystal Towers’ residents. 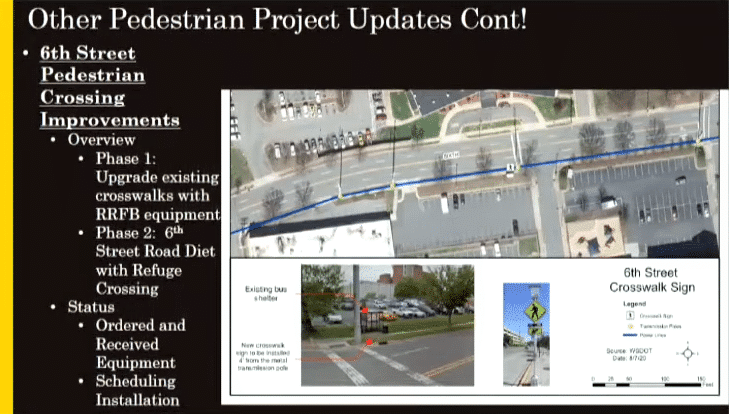 Unfortunately, even though it was on the DOT’s presentation (road diet with refuge crossing), there was no mention of reducing Sixth Street to three lanes in front of Crystal Towers, at the August Public Works Committee meeting.

A road diet is coming to Sixth Street later this year, promising relief to pedestrians who struggle to make it across from Crystal Towers to the bus stop and other places on the south side of the street.

What’s a road diet? It’s when highway officials reduce the number of lanes on a road in hopes of improving safety.

Sixth Street has four lanes in between Spruce and Spring streets. Under the plan, Sixth Street would be reduced to three lanes in that stretch, with a central turn lane most of the distance.”

A road diet is the type of next-level safety feature that the residents of Crystal Towers deserve. They also deserve an RRFB (rectangular rapid flashing beacon) at Fifth and Poplar Streets and or Fifth and Spruce Streets. After all, that’s where Crystal Towers resident D.D. Watkins was severely injured when an SUV ran over her wheelchair. Ms. Watkins and anyone else at Crystal Towers should be able to get from Sixth Street to Fourth Street without fearing for their lives.