The New Winston Museum’s “Envisioning Columbian Heights” presentation at Mars Hill Baptist Church Thursday night drew a crowd of 40-50 people. Many of the attendees are longtime residents of East Winston with strong ties to Columbian Heights. They fondly remembered Columbian Heights and proudly recounted their memories of the neighborhood.

Columbian Heights is the neighborhood immediately surrounding Winston-Salem State University. It was founded by Simon Green Atkins in the 1890s. It was part of his twin vision of promoting African American education and homeownership.

During the age of Jim Crow Columbian Heights was home to many Black professionals; teachers, business owners, fireman, etc. It was a stable Black neighborhood.

The New Winston Museum’s presentation on Columbian Heights did a good job examining the neighborhood’s rise and fall. The paper that they handed out Thursday at Mars Hill is essential reading on the subject.

It is important to remember that if city and county planners had worked to preserve Atkins’ vision for Columbian Heights, perhaps Columbian Heights would today be on par with other middle-class neighborhoods in the city, such as Washington Park and Ardmore.

Winston-Salem modernized its roads in the 50s and 60s at East Winston’s expense, a practice now referred to as transportation racism. White planners of that era at the city and county level didn’t value East Winston. They were either ignorant or antagonistic to Simon Atkins’ vision of Black homeownership.

After Highway 52 and I-40 mortally wounded Columbian Heights, more problems followed. Industrial businesses were allowed to open on the edges of Columbian Heights. Low-income apartments were built. The City even opened a water treatment plant there, in recent years. And the new Union Station development project might just be a ploy to get black bus riders out of Downtown Winston.

Columbian Heights is just one example of a huge sin in Winston’s past that helps to explain its present unequal and segregated state. Prominent Black neighborhoods, located on some of the city’s best real estate were destroyed as ‘Old Salem’ and other historic white neighborhoods were painstakingly preserved.

Sadly, Columbian Heights, along with Happy Hill, Belews Street, Depot Street and other Black neighborhoods are today just a memory. 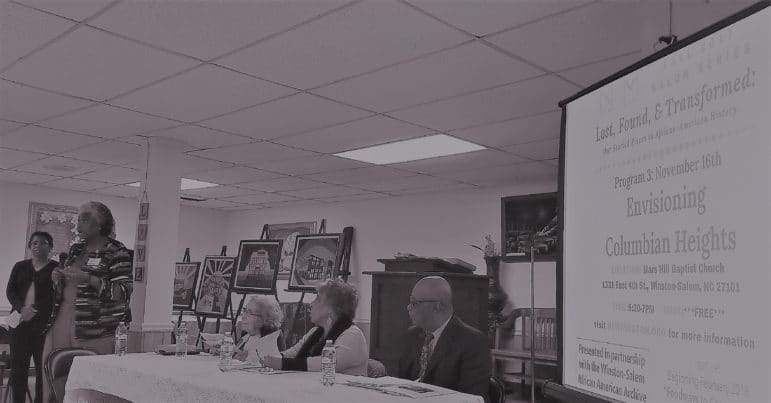