For nearly a decade now, there have been serious plans to ‘transform’ the Cleveland Avenue homes. The process of erasing the Cleveland Avenue Homes and building NEWside has begun. According to HAWS’ documents, the first group of 28 residents has been relocated. On Monday, HAWS Director Kevin Cheshire told HAWS’ board that demolition and abatement work at Brown School was on schedule. Cheshire also announced that HAWS received a North Carolina Housing Finance Agency $5.6 million supplemental award to be used at Cleveland Avenue. And last but not least, Cheshire said that he expected a handshake agreement to sell WS/FC Schools property adjacent to Cleveland Avenue for a new Ashley school to be formalized soon.

The Housing Authority of Winston-Salem has long desired to convert the 1950s public housing complex into a new, mixed-income development. Like Kimberly Park (late 1990s) and Happy Hill (early 2000s) before it, Cleveland Avenue is getting a major overhaul.

Policymakers have stressed that the poverty concentration inherent in traditional public housing complexes is unacceptable.

Poverty is a huge problem in Cleveland Avenue and in other forgotten Black/Brown communities throughout East Winston. But the poor aren’t the problem. Racist policies of disinvestment and neglect are the problem. Poorly designed, outdated housing units born of Urban Renewal programs placed east of Highway 52 are the problem.

In a more just society, Cleveland Avenue Homes would be rebuilt without any displacement. One housing unit torn down, one housing unit rebuilt-that’s the model we should be using. When a neighborhood is disrupted, community is lost. 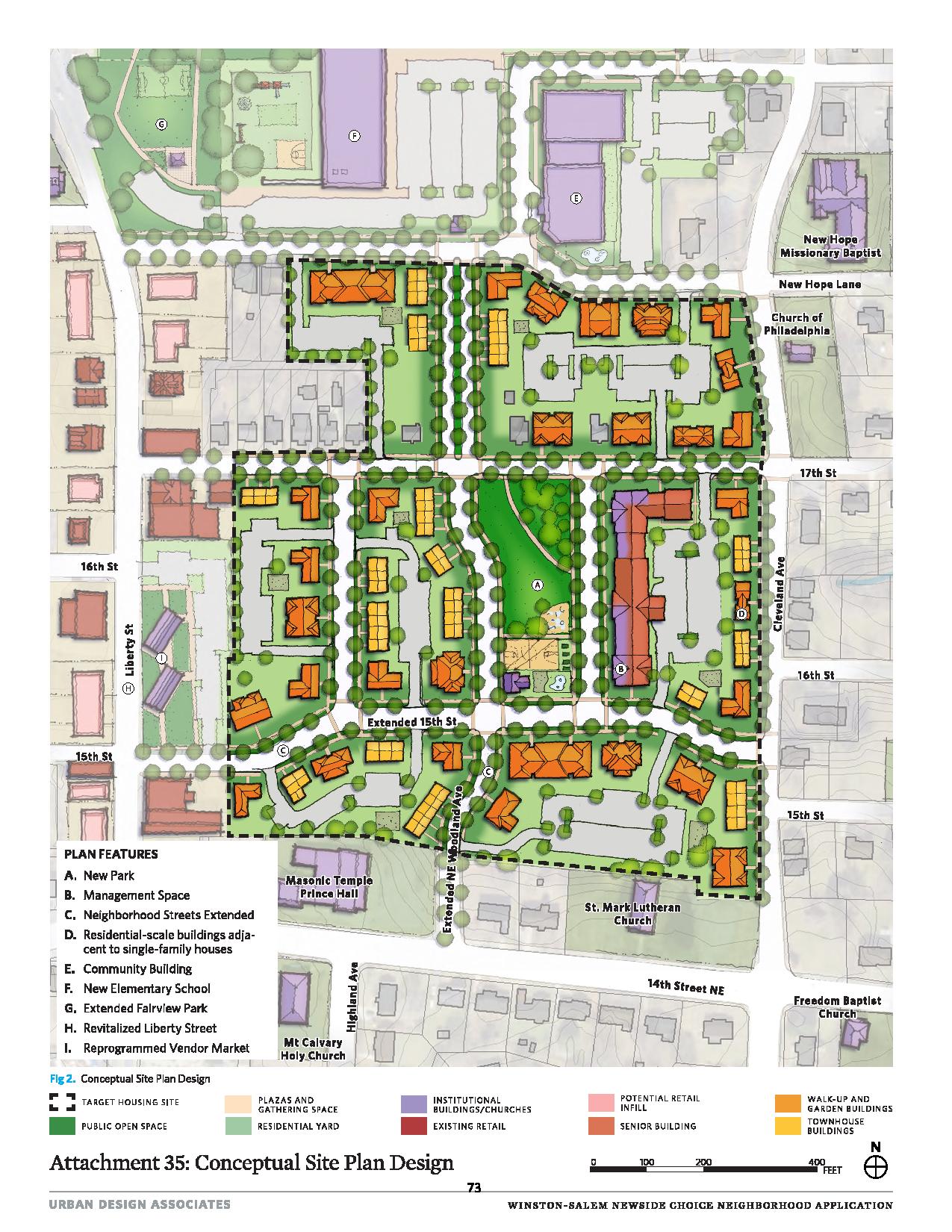 “The years following World War II and continuing into the 1960s were defined by a massive housing boom. This housing boom was directly correlated with war veterans returning from deployment and an increase in industrial and manufacturing jobs in Winston-Salem. Companies such as Western Electric and the R.J. Reynolds Tobacco Company were major employers during the period.

On August 3, 1948, the Planning Department of Winston-Salem created a master plan for development over the next two decades (Cruise 2011:24). The plan included an improved street system, new and enlarged recreational zones, new public buildings, and housing redevelopment and rehabilitation. The housing redevelopment was meant to “get rid of slums” and transform the areas into industrial or recreational activities (Cruise 2011:24). The plan also called for the city to rehabilitate housing in the economically depressed areas.

However, the expense of both housing redevelopment and rehabilitation were too costly for the city to undertake alone. In 1949, the American Housing Act was passed, which provided federal financing for slum clearance programs associated with urban renewal projects and further increased the role of the FHA. As part of the act, the Federal Urban Renewal Administration (FURA) was established (Hanchett 1998:248). FURA’s goal was to provide better housing for low-income Americans by tearing down slums using government money, and subsequently selling the land to developers at reduced prices to erect affordable housing (Hanchett 1998:249). The legislation offered $1,000,000,000 in loans and $500,000,000 in grants to assist cities with slum clearance on a first come, first serve basis (Cruise 2011:26).

The American Housing Act also relaxed the definition of “slums” and funds could be used to demolish “blighted areas,” which were defined as having inappropriate or incongruous land use (Hanchett 1998:248; Figure 3.2-3.3).

The buildings had a unified appearance and stood apart from their surroundings. Architectural detailing on the exterior of the buildings was severely limited and gave the buildings “severe, institutional” appearances (Lusignan 2004:E66). Supported by the federal government, the City-County Planning Board of Winston-Salem carried out its master plan to redevelop the “blighted” areas around downtown in 1949.

The Planning Board’sefforts resulted in entirely displaced communities and razed many of the city’s historically Black communities. Projects such as the expansion of the campuses of the R.J. Reynolds Tobacco Company and Slater Academy (known today as Winston-Salem State University) demolished historically Black neighborhoods (Oppermann 1997:E36). These neighborhoods included Columbian Heights and Belews Street.

In order to carry out the master plan, the city reignited HAWS, which had been placed on the back burner during World War II. The first target area for slum clearance was known as The Pond, located north of downtown Winston-Salem (Cruise 2011:29). The slum clearance included the destruction of 373 dwellings in order to make way for new public housing units. HAWS proceeded to construct four public housing projects in the early 1950s, including Happy Hill Gardens, Kimberly Park Terrace, and the Cleveland Avenue Homes for Black residents and Piedmont Park for White residents (Fearnbach2015:69).

The first to be built was Happy Hill Gardens, a superblock complex east of Waughton Street that consisted of one- and two-story brick-veneered units arranged around courtyards. Many families who had been living in The Pond were relocated to Happy Hill Gardens. Shortly after the completion of Happy Hill Gardens, the 240-unit Piedmont Park was completed in 1953.

The first phase of Kimberly Park Terrace was completed in 1953 on land that was formerly The Pond. The 244-unit Cleveland Avenue Homes, the subject property of this survey, was completed in 1955. All four complexes featured brick veneered buildings set on rolling lawns with front porches, heating system, indoor plumbing, and other amenities (HAWS 2012). Over the next two decades, slum clearance, public housing, and urban renewal drastically reshaped Winston-Salem.

Urban renewal continued to chisel away at historically Black neighborhoods through road construction projects in the 1950s and 1960s. Around the same time as the construction of the Cleveland Avenue Homes in 1955, US 52, originally called the North-South Expressway, was completed (Fearnbach 2012:35).

Bisecting the city north to south, US 52 connected new suburbs to the north and south with the city center and served as a major trucking route (Cruise 2011:60).

Prior to the construction of US 52, Liberty Street served as the dividing line between Black Winston-Salem and White Winston-Salem. Near the Cleveland Avenue Homes, US 52 closely aligns with Liberty Street. US 52 roughly follows N Martin Luther King Jr. Drive to the south. The area that became US 52 was known as Monkey Bottom and was home to a significant portion of Winston-Salem’s Black population. The area was completely cleared and left thousands of residents without a home.

Throughout the mid-1950s suburban development in northeast Winston-Salem increased to accommodate displaced Black citizens. Primarily built for middle-class Black families, some of these early residential developments included neighborhoods such as Slater Park (1954), Skyland Park (1955), Monticello Park (1955), Fairway Park Estates (1955), and Castle Heights (1958). All were constructed as a direct result of social policies enacted by both the local and national governments.”

–September 2022 update from HAWS board packet

–A city divided: The resurgent downtown and the abandoned urban core