The amount of money that is going to be invested in and around Cleveland Avenue is astounding. In a sense, it’s like Cleveland Avenue, and adjacent neighborhoods won the lottery. On the other hand, the infusion of tens of millions of public and private dollars will lead to the displacement of longtime residents if the community is not involved in its “transformation.”

I worry about residents who have suffered for years in poorly maintained public housing units won’t be allowed to live in the new homes on Cleveland Avenue. On the other side of 25th Street, Piedmont Circle is in the shadows. The Choice Neighborhood Grant that HAWS was awarded earlier this year won’t benefit Piedmont Circle. Piedmont Circle should have been redeveloped by the City (via housing bonds) years ago. Piedmont Circle’s neglect is another example of the City of Winston-Salem prioritizing downtown development and economic development above affordable housing.

Piedmont Circle is an interesting community. It was the second public housing complex built in Winston, after Happy Hill Gardens. It was originally built for white residents, while public housing at Happy Hill, Cleveland Avenue, and Kimberly Park were built for African Americans. Redeveloping the Cleveland Avenue homes while ignoring the needs of Piedmont Circle, Sunrise Towers, and Crystal Towers is morally wrong.

“When Congress passed the Civil Rights Act of 1964, the city’s public-housing officials opened Piedmont Park to black families, and the other three housing complexes to white families. Like Piedmont Park, Brookwood also was predominantly white back then. Chisom said that his grandmother and aunt were among the first blacks to integrate Brookwood. By the mid-’60s, most of the whites had moved out and the neighborhood became largely black.” –Winston-Salem Journal, Aug 4, 2012 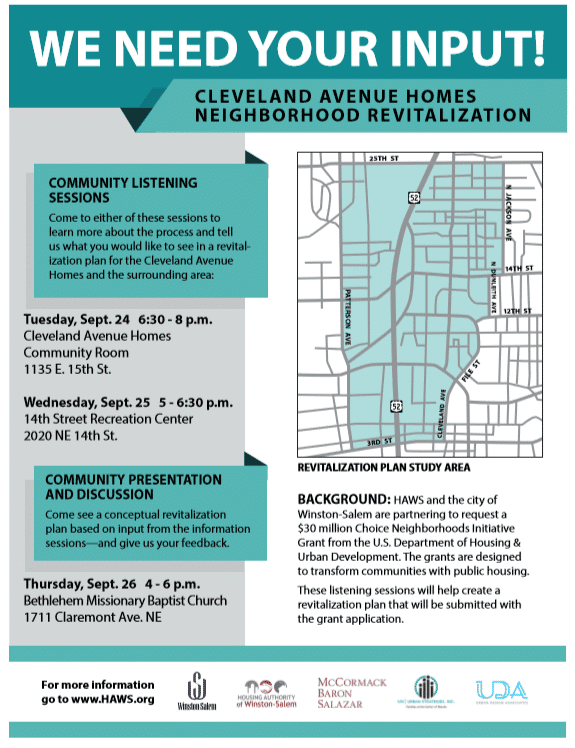