On this day, 20 years ago R.J. Reynolds finally pulled the plug on its shameless Joe Camel campaign. The July 11, 1997, New York Times obituary of Joe Camel is worth rereading.

Joe Camel, the cartoon character that became the focus of perhaps the most intense attacks ever leveled against an American advertising campaign, is being sent packing by the R. J. Reynolds Tobacco Company, which will replace it with stylized versions of Camel cigarettes’ original camel trademark.

Joe Camel, a Giant in Tobacco Marketing, is Dead at 23-New York Times

Reynolds launched its Joe Camel campaign in 1988, the 75th anniversary of their Camel brand of cigarettes. The problem for Reynolds was that its older customers were dying off and young people weren’t smoking Camels.

Reynolds’ was struggling to attract and retain smokers. Its other brands, Winston and Salem had also lost the popularity that they once had. In the late 1980s, smokers viewed Camels and other RJR brands as their father’s cigarettes. Phillip Morris’ Marlboros had a “coolness” that Reynolds’ cigarette brands lacked.

In a shameless effort to attract young smokers, Reynolds put Old Joe on the shelf and launched a massive ad campaign to introduce Joe Camel to potential young smokers. The nine-year run of Joe Camel worked. Billboards and magazines ads proclaimed the coolness of Camel cigarettes. Beyond traditional advertisements, Reynolds’ put Joe Camel’s image on t-shirts and an assortment of other merchandise that Camel smokers could purchase with Camel Cash-a loyalty reward program.

Camels are still a distant third to Phillip Morris’ Marlboro brand. But if it wasn’t for 9 years of relentlessly marketing to children Camels might have continued to decline precipitously to the point of negligible market share. That’s the what happened to Reynolds’ once popular brands, Winston and Salem. (Both Winston and Salem cigarette brands are now produced and marketed by Imperial Tobacco)

Joe Camel is a disgraceful chapter in Reynolds’ history. It’s an example of the Tobacco industry’s decades-long efforts to put their profits above the public’s health. Here in what some people still call, “the Camel City” we should remember Joe Camel and honestly reflect on R.J. Reynolds’ legacy. Reynolds’ philanthropic giving to various local non-profits tends to blind most in Winston-Salem from seeing Reynolds for what it really is. 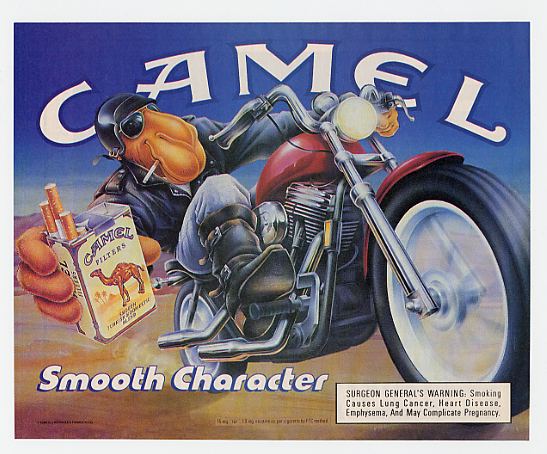 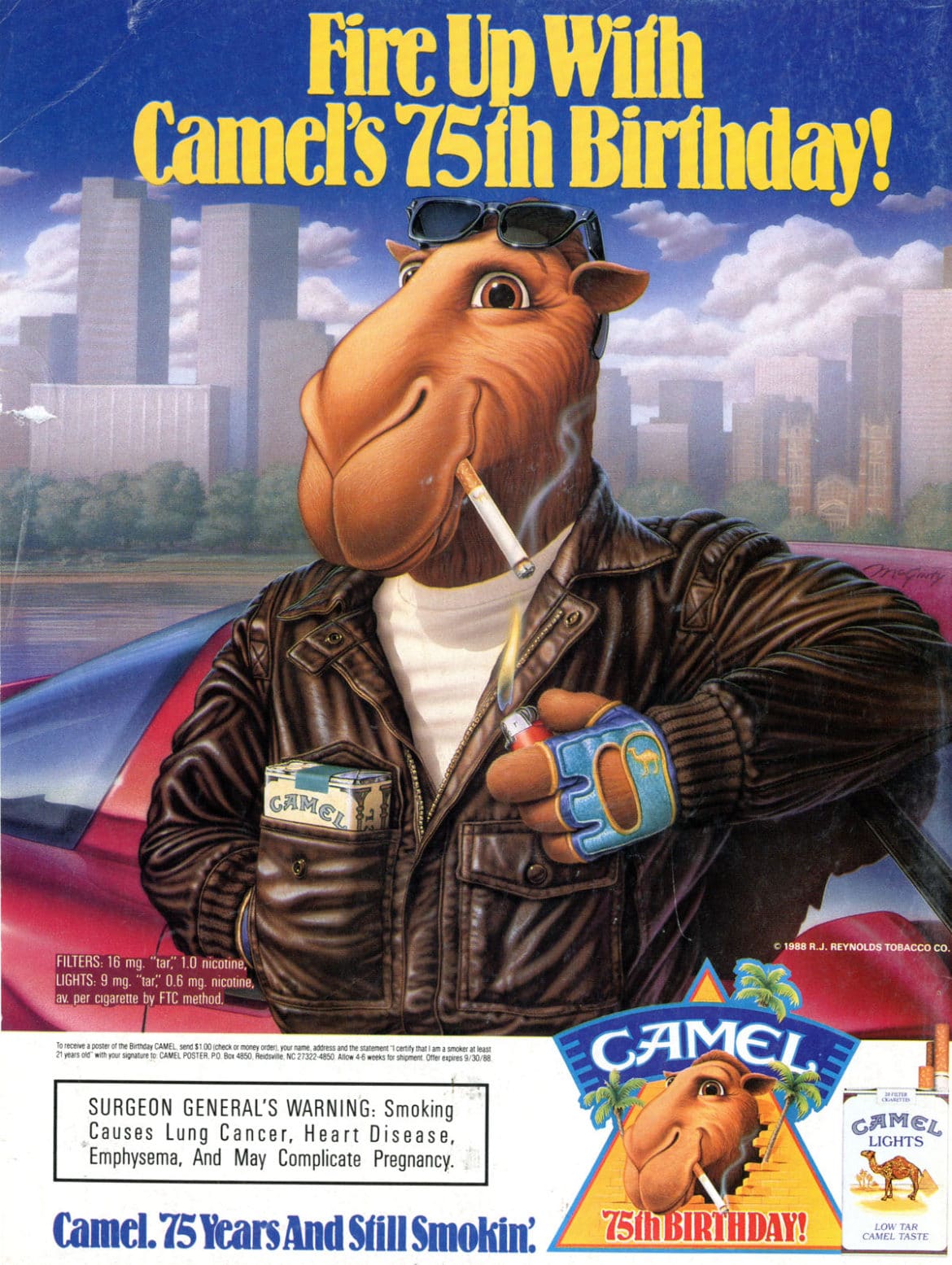 Plantation Place, an apartment complex located along highway 109, where Winston's Easton neighborhood faces Wallburg, has a new name. But it still looks like exploitation to me. ...

“Public officials are more concerned about so-called scammers getting this money than they are about the people who truly need it.” -@Dan__Rose

Plantation Place, an apartment complex on the outskirts of Winston's Easton neighborhood has a new name. But it still looks like exploitation to me.

From 2002-2013, @CityofWS held its annual Rock the Block festival in DTWS. That transitioned into the Texas Pete Culinary fest in 2014. After a few years, the city's mid-September festival faded away.

If we, as a society, are not willing to face and accept the reality of what causes and perpetuates instability and inequity within ourselves, *how* can we, truthfully, say we are striving to overcome these ills? https://twitter.com/hjnwinstonsalem/status/1438256117520470016 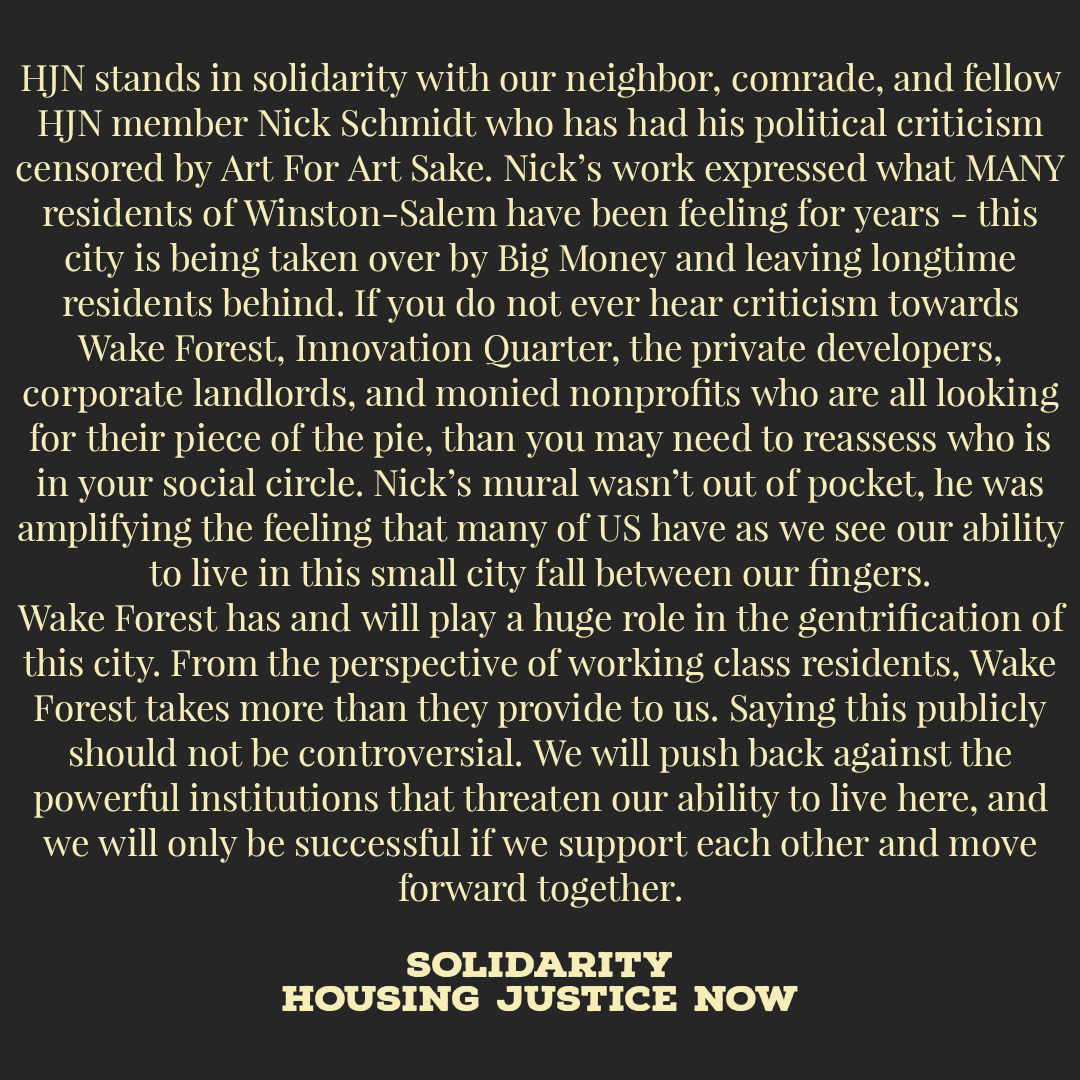 Our statement in solidarity with HJN member @NikolasLSchmidt

"The Mural Fest has always had rules about the content that artists can paint — no nudity, no violence, no politics, said AFAS CEO, Harry Knabb."