I found this article in the Central Library’s North Carolina Room some time ago. It’s eye-opening. In the article below (that I am sharing for educational purposes) we learn that some prime real estate near Buena Vista has a hidden history. It was once used by Francis Fries to house enslaved Africans who were too old to be exploited in his woolen mill factory. Fries operated a few different mills in the antebellum period. The enslaved Africans who retired to his property, then west of the city may have worked at one of the mills that were converted into Brookstown Inn in recent years. Fries more than any other person symbolizes Salem’s hard pivot from a congregation town to just another racist southern community.

Imagine if Francis Fries’ slaves were given title to that valuable land that passed from the Fries family to the Shaffner family. Imagine the transformational generational wealth that their families would have received. Our city is defined by the huge racial wealth gap, “Jim Crow in concrete” that separates East Winston from the rest of the city. Slavery and Jim Crow are to blame.

The 700-acre Shaffner farm that has been subdivided into some of the city’s higher priced residential property once provided homes for “retired” slaves.

The old farm, lying west of early Buena Vista developments and stretching from Pine Valley Road to Peace Haven Road, was first subdivided in 1948. Lots auctioned off then at about $1,500 each are worth between $7,000 and $9,000 apiece today.

A sizable tract from the Shaffner farm along Robin Hood Road became the site for a large home built by the late R. J. Reynolds Jr. That estate has recently been subdivided, and the central core containing the Reynolds home has been given to Wake Forest College.

The farm’s early history was just as interesting, according to W. F. Shaffner Jr.

It was owned by my great grandfather, Francis Fries,” Shaffner recalls. “He used it as a place to send his slaves when they became too old to work in his woolen mill in Salem. He gave them a cow and pig and a place to live. It was his version of Social Security of more than 100 years ago.”

When Fries died, he left five heirs, including Shaffner’s grandmother.

“The heirs were Interested in their father’s investments in mills and other projects, but none wanted the acreage way out in the country which had become known as Fries’ Quarters,” Shaffner says.

His grandmother, “out of the goodness of her heart” finally agreed to accept the place where the superannuated Negroes lived as “her ex- executor’s fee, Shatner relates.

“She was not looking into the future,” he says. She was just lucky and wound up with what eventually became one of the most valuable of the properties left by my great grandfather.” 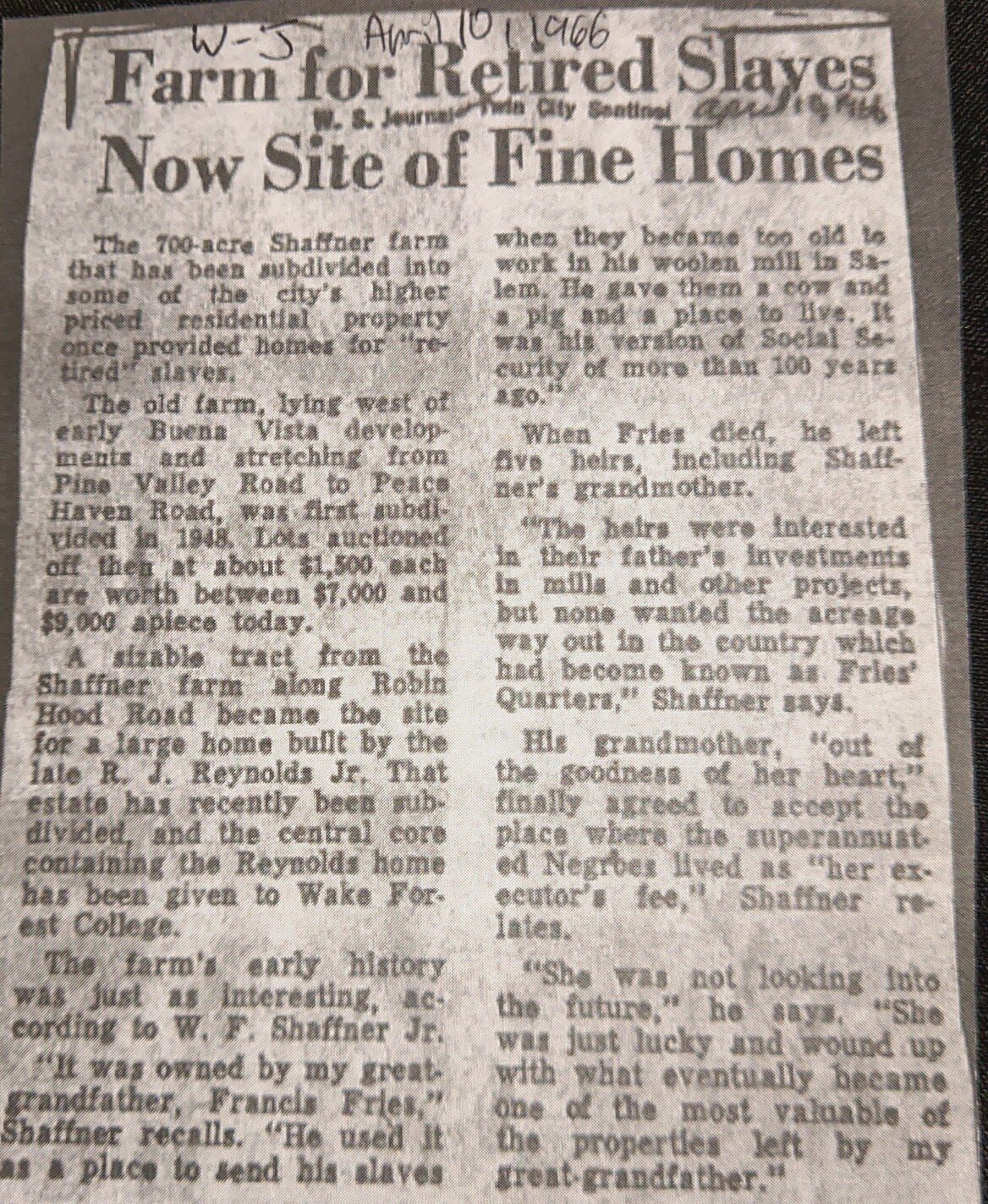